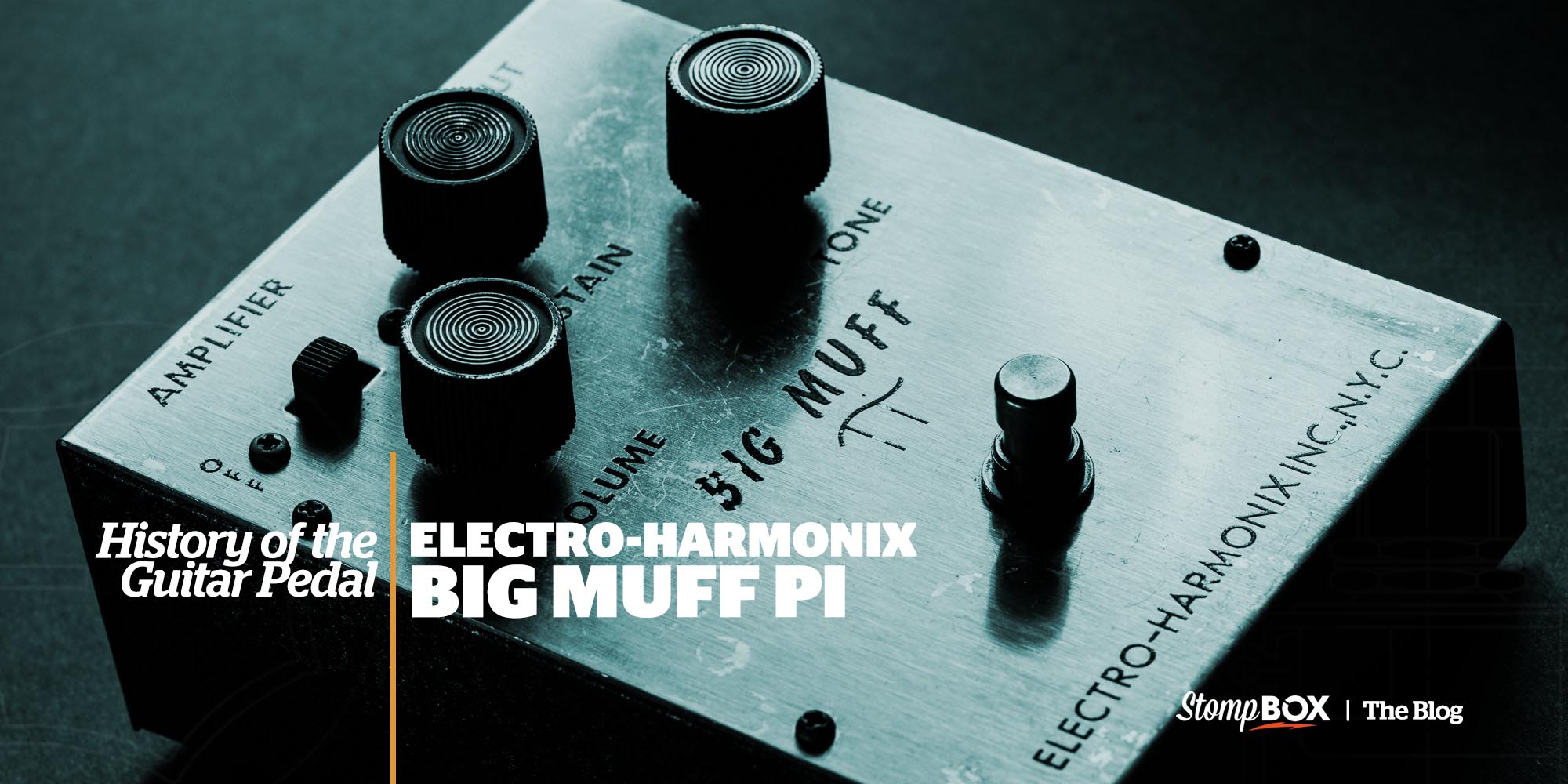 The Big Muff Pi from New York City based effects pioneer Electro-Harmonix celebrated its 50 year anniversary in 2019. The Big Muff has been favored by some very famous guitarists, and the downright staggering number of variations of this stomp box have been heavily collected in its half century of saturation. While it may be unfortunately named (in a way that puts it squarely as a relic of a time when the music biz was saturated with sexism), there is no denying that the Big Muff Pi is one of the most widely heard distortion pedals of all. 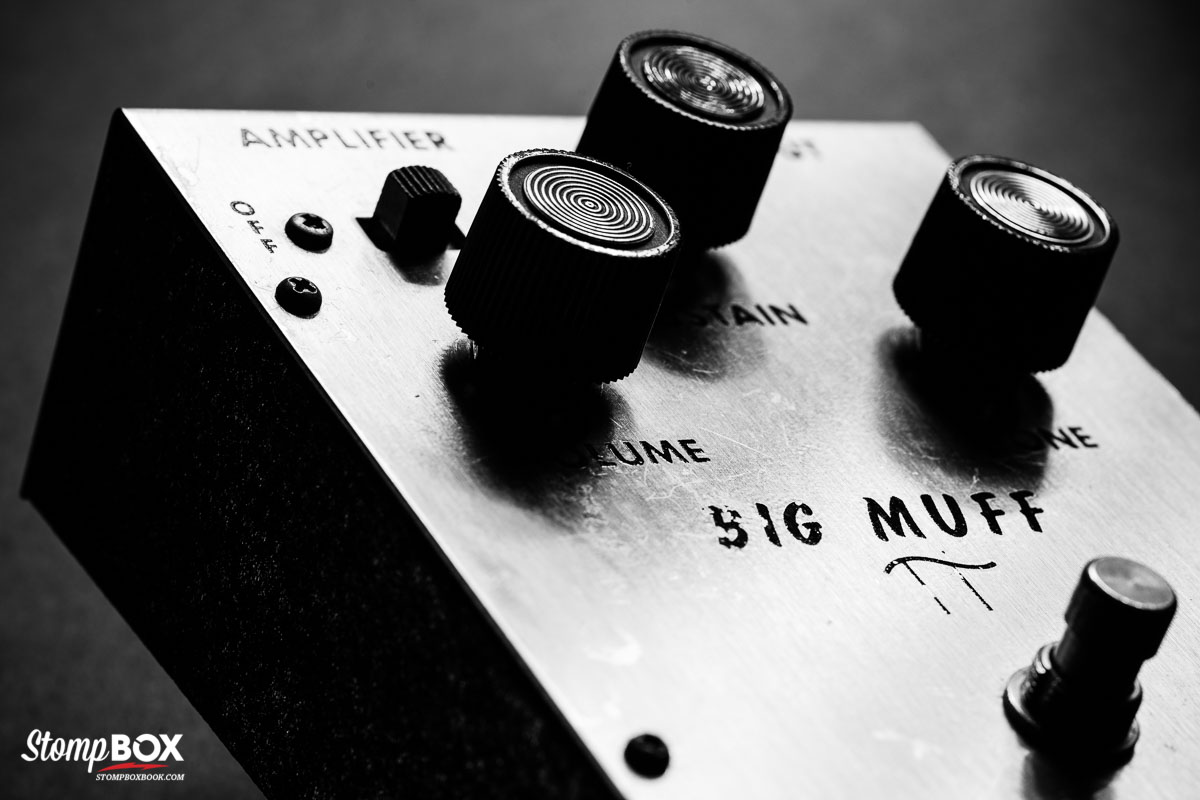 While the ‘Muff is typically thought of as a fuzzbox, its circuit is different and more complex than the early fuzz boxes, and as a result the sound is smoother and full of complex harmonic texture and sustain. As Electro-Harmonix founder Mike Matthews recollected to a Japanese magazine in 2007;  “Back in 1969 I [Electro-Harmonix] was already selling the Muff Fuzz, which was a mild overdrive circuit in an LPB-1 box. I wanted to come out with a three knob distortion unit in a bigger box. I asked my buddy, Bell Labs designer, Bob Myer, to design a unit, one that would have a lot of sustain. When I got the prototype from Bob, I loved the long sustain. This was done by cascading the circuit into additional sections, each one clipped by twin diodes. However, when you clip, the tone can be a bit raspy. So, I spent a couple of days changing capacitors to roll off distortion in the highs, and eventually found that the best long sustaining tone that was a sweet violin-like sound was done by having three capacitors in different parts of the circuit rolling off the rasp. We plunged into production and I brought the very first units up to Henry, the boss at Manny’s Music Store on 48th Street, NYC. About a week later, I stopped by Manny’s to buy some cables, and Henry yelled out to me, ‘Hey Mike, I sold one of those new Big Muffs to Jimi Hendrix!’”

Matthews himself got into the world of effects pedal building when he was contracted to design and take over production for the Guild guitar company’s Foxy Lady fuzz in 1968. The earliest E-H branded pedals appeared shortly afterwards that same year, which included the short lived Muff fuzz.

This pedal has also gone through several variations in its fifty year history, many of which make collectors of varying stripes salivate. The earliest model introduced in 1969 (Version 1, known as the ‘triangle’ issue, as the three control knobs form a triangle in their layout) features a crude design with a very simple black font and very little in the way of ornamentation. Version 1 was also available as a Guild Foxy Lady, and the three knob layout off that particular version leaves little doubt as to it being the Big Muff under another name. Early Big Muffs were purchased and used early on by the likes of Jimi Hendrix, Carlos Santana, John Lennon, Robert Fripp, and Steve Howe. One of the most important uses of the Muff was on the Isley Brothers 1974 hit reworking of their track “That Lady”; Ernie Isley’s Strat Big Muff tone is pushed to the forefront and drives the song into gloriously oozy guitar heroics. Even in its first iteration, the Big Muff used several different circuits that result in subtle tone variations, and was made in this style until 1973. E-H currently offers a reissue of V1, in both large and small enclosures.

Version 2 (known as the “Ram’s Head,” with the addition of the trippy hippy artwork added to the lower right face of the pedal) was introduced in 1973, came in a larger enclosure, and took on a more stylized look with a classic art nouveau-inspired font seen in either red or blue. As with Version 1, there were several variations of this pedal in the circuit in the four years it was produced. This version of the Muff was embraced by David Gilmour and it became a crucial part of his tone beginning with Pink Floyd’s Animals, continuing on to The Wall LPs and beyond until the present day, making for one of the most widely heard distortion units in the history of recorded music. Big Muff enthusiasts tend to characterize the tone of V2 as having less midrange, more gain, and more bass than V1.

Version 3 (introduced circa 1977 and built until 1979) essentially continued on with a similar tone to V2 (with the now expected circuit variations), but with a much fancier design sporting a bold and large red font framed by the knobs to the top and a black patch on the bottom. A handy power adaptor plug was added for those who wanted an alternative to battery power. Version 4 (powered by an op-amp design, looking exactly like V3 and built in small numbers) appeared around 1978. These are known to be more consistent tone wise from example to example, and have a bit less gain and low end. Version 5 (circa 1978-1981) continued in the op-amp design, but added a tone bypass switch that made for a brighter tone that is thought to have more overall “presence” in its ability to cut through a mix. E-H currently makes an op-amp Muff that reissues V5.

Version 6 was the last of the Muffs made in the US for many years, and was built from circa 1979-1984. This is also known as the “Reverse Logo” muff, as the black bottom border now became red, with a white bordered black font, looking really neat with a black background. These returned to the design and tone of V3, more or less, with more consistency in the build and carried on with the tone bypass control. Unfortunately, bankruptcy stopped E-H, and there were no more new Muffs until 1992, although that’s not entirely true… 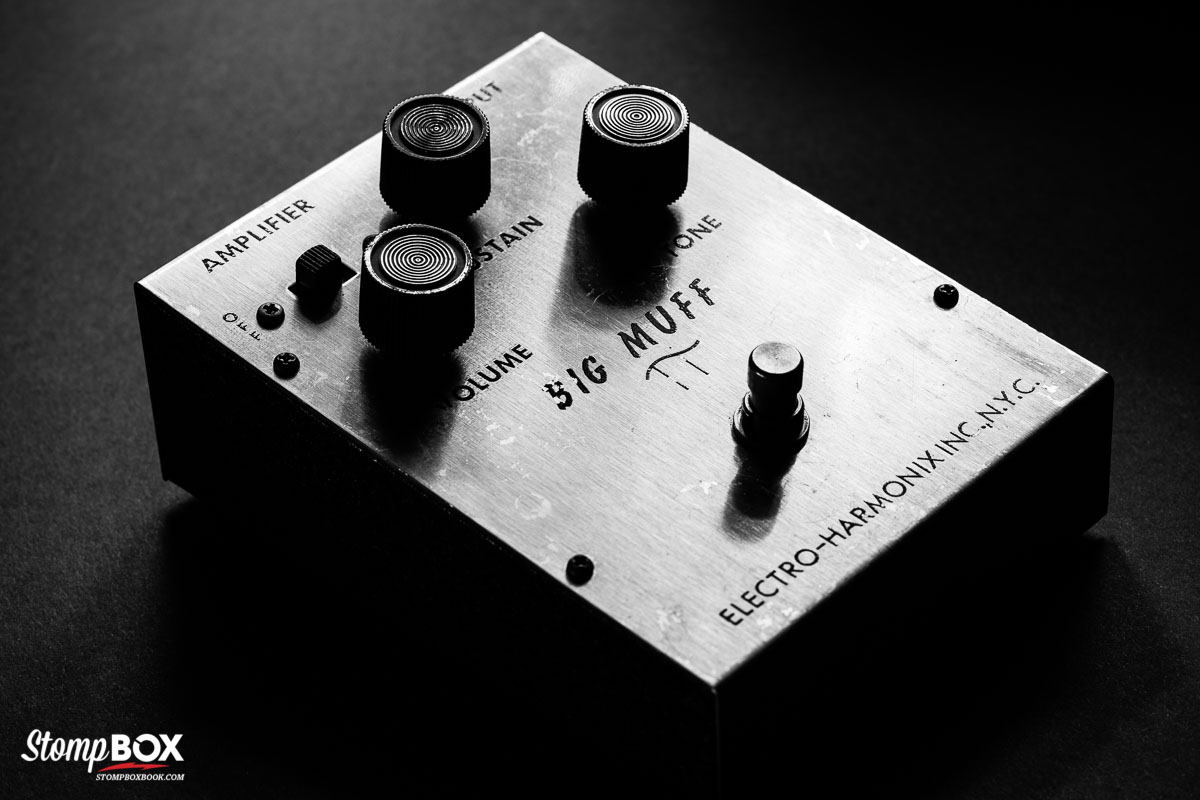 Thanks to a Russian connection made by Matthews in the late 1970s, his New Sensor Co. worked directly with a Russian manufacturer to supply vacuum tubes to manufacturers and consumers alike, starting in 1989 with the introduction of Sovtek tubes. Thanks to a burgeoning retro gear scene, underground guitar heroes such as J Mascis and Billy Corgan drove up the demand for vintage Big Muffs, and Matthews was encouraged to start pedal production again. Although the Russian-made Muffs arrived officially in 1994, the first Russian-made pedal, Red Army Overdrive, was built in small numbers in 1991-92, and was nothing short of a Big Muff with a different name. The Big Muff officially returned in mid-1992, and the Russian made pedals became very popular in the alternative rock world, being favored by the likes of Sonic Youth. There are several design variations of the Russian Muffs built until around 2000; green, black, or the highly coveted “Civil War” blue/ grey face which, to my recollection, was the first style available. I purchased one of these as soon as they became available, and used it for my first professional recording (I, Sharko, Bomp! Records 1995), and for many gigs. Sadly, I gave mine away as the sketchy, weakly made input/ output jacks continued to fail. The Russian Muffs are known to have the punch of V1, and the roar of V3. E-H currently offers a ‘Green Russian’ reissue, once again in large or small enclosures. E-H/ Sovtek also currently offers a Deluxe Big Muff which replicates the ‘Civil War’ color scheme but with more tone shaping flexibility.

In 2000, E-H began producing a US-made Muff which took the iconic graphics of V3, added a helpful LED to the face, and feature a tone similar to a ‘70s model but with more noticeable low end girth. Special editions were made for UK band Mogwai in 2001 (it reads “Mogwai” on the face in place of Big Muff), and also a tie-in version in co-promotion with Premier Guitar magazine for their Pedal Issue in 2010, replacing the words Big Muff with The Pedal Issue. There’s also a Little Big Muff, made from 2006 onwards, designed to take up less real estate on a pedal board, a Bass Big Muff (2009 onwards, with a Deluxe model added in 2013), and a Tone Wicker Muff (2009 onwards) that offers more tone variations that head to a brighter sound. Giving up the traditional, brighter silicon transistors that were a Big Muff mainstay from the beginning, the Germanium Big Muff uses those less consistent, tonally darker transistors to make for a Muff that is more like a ‘60s fuzz, but with versatile tone shaping controls and two channels, although that coveted Muff sustain is nowhere to be found. 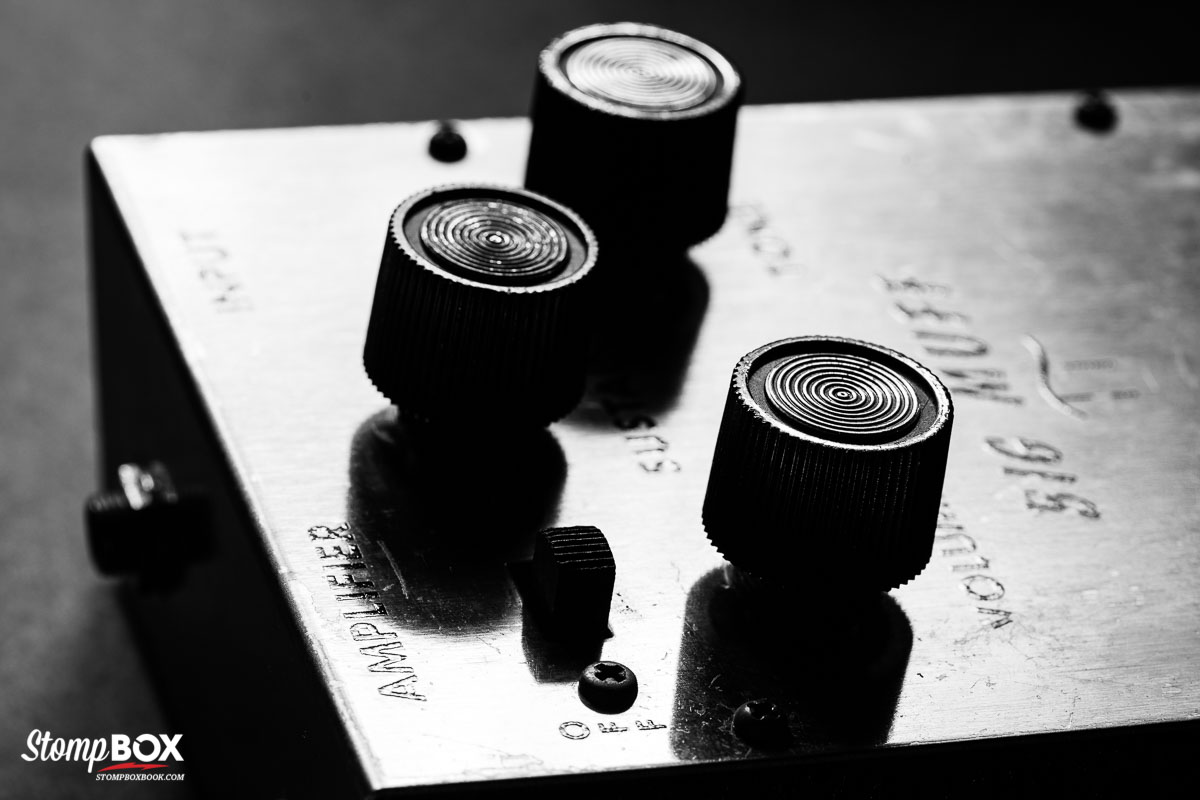 Perhaps the ultimate Big Muff was introduced in 2014 with the introduction of the Deluxe model. The versatility of the controls and switches allows the player to dial in tones that cut through a mix in specific rooms (a common criticism of the Big Muff is that its bass heavy tone can get buried in the competing frequencies, making it difficult for a player to hear their saturated goodness properly). The midrange control makes shaping the sound to a particular amplifier a breeze, and the bass boost switch is perfect for those who desire the ultimate “God Of Thunder” Muff vibes.

In addition to the “official” Big Muffs, both American and Russian, there have been dozens of boutique pedal builders that have made their own clones of particular Muff varieties. It’s no wonder that the voice of this pedal has become one of the most recognizable of all stomp boxes: an absolute classic.

Get on our newsletter for book updates. Coming Sumer 2020 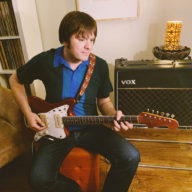 Derek See has been surrounded by music his entire life, and his mom began teaching him guitar as a toddler. Drawn deeply to the music and tones of the past, Derek has always been fascinated with capturing the sounds heard on his favorite records, and has been a working musician since he was 14. Derek began his professional writing career in 2006, as he began contributing to magazines such as Acoustic Guitar, Fretboard Journal, Premier Guitar, and Shindig. He has also been a featured contributor on blogs Aquarium Drunkard, Bedazzled, and his own Derek’s Daily 45.

In addition to his own group, The Gentle Cycle, Derek is a member of The Chocolate Watchband, Rain Parade, and also played with Country Joe McDonald.