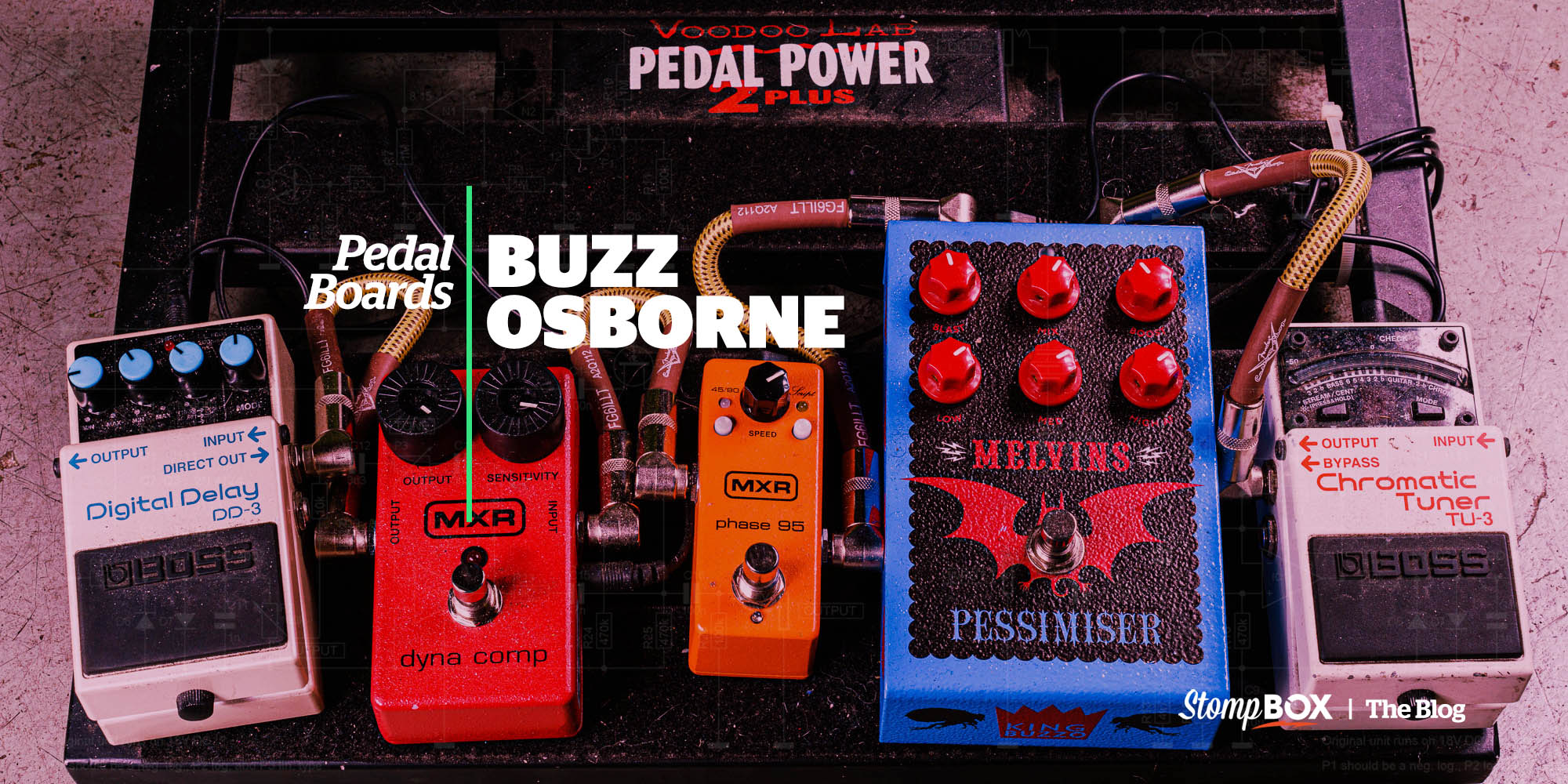 A fan of keeping things simple and to the point, Melvins frontman Buzz Osborne nevertheless has some very specific ideas about the proper implementation of guitar pedals. Here’s his rundown of his current pedal board set-up.

Why did you go with this particular sequence of pedals?

I prefer to run the tuner first, because I don’t want anything screwing with the signal before it gets tuned.

We toured once a long time ago in Australia with Tool, and I had a run in with Adam’s guitar tech about that very issue. I was using Adam’s entire set up, pedal board and all. But when I wanted to wire in my Boss distortion pedal right before Adam’s delay, his tech threw a shit fit.

“No way are you messing with Adam’s pedal board, dude,” he rudely told me, when I suggested he add it in. “I’m not ‘messing’ with Adam’s pedal board and I have permission to use his entire rig,” I told him. “Do you really think he’s going to lose his shit if we wire in an extra pedal? Besides, it won’t ruin anything. He’s already using about two dozen pedals anyway, so lighten up.” “Don’t tell me to lighten up, it’s my job we’re talking about here, dude,” he again rudely proclaimed to me.

I could see this was going nowhere, so I asked him what my options were. He told me the only possibility would be plugging the distortion in before it went into his board. Noting that I needed to use Adam’s tuner, I asked him whether running a distortion box in front of it would mess up the signal and make it harder to tune the guitar? No, he assured me, and then he added that it would, in fact, make the signal actually better for the tuner…

Better? I thought that over, and then asked him that if it was “better” to run a distortion box in front of a tuner, then why didn’t he have Adam’s pedal board wired up that way? He just stared at me and then said, “I just don’t.” Then he stomped off.

Okay, then…. So I ran my distortion box in front of the tuner, and simply shut it off before I tuned my guitar. It was a pain in the ass, but that was all I was going to get out of that fucking asshole. I hate rock and roll “professionals” like him – and boy, what a joy he was to deal with for the rest of the tour. A few years later, he ended up drinking himself to death. He’s a good example of why I don’t drink. 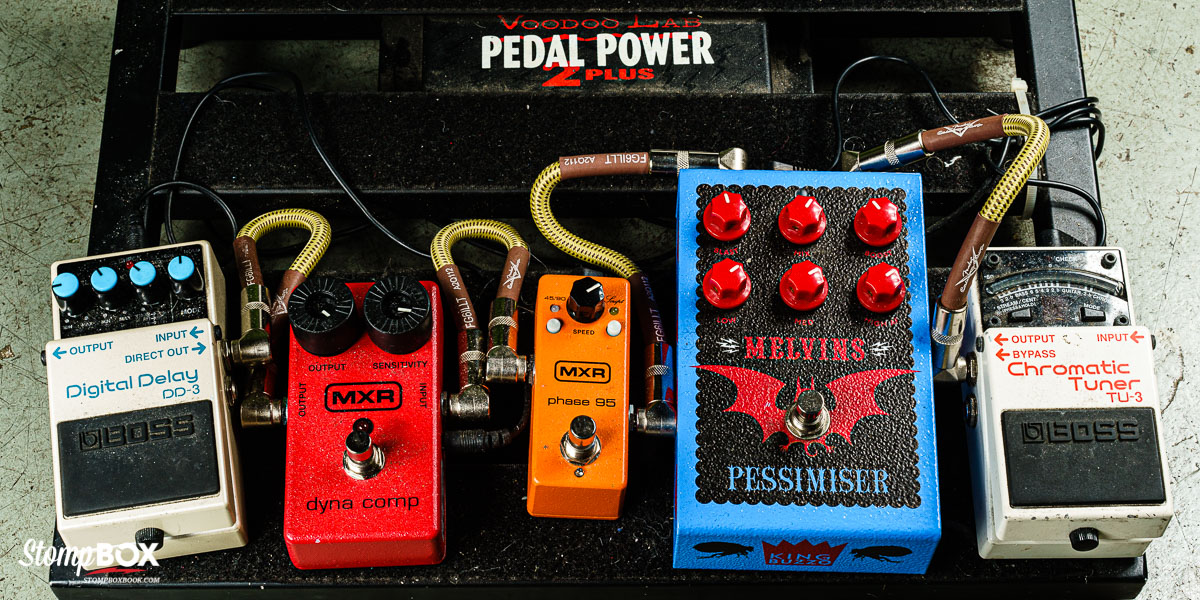 What comes after the tuner?

Next in line after the tuner is the distortion box. I started out thirty-some years ago using a Rat distortion box, and then a Boss bass distortion. Lately, I’ve started using one of my own designs called the Melvins Pessimiser. Actually, I designed it with Hilbish Design, who also build my guitar amps. It’s a great box with a three-band EQ, and I believe it’s the only distortion box that has that option.

Next, I run an MXR compressor, which I think is one of the most underrated effects out there. I love it. With the compressor, the guitar plays like melted butter. It’s really cool. I use it here and there throughout the set.

Next would be the space for what I call the “special effects” pedal. It could be anything that makes the guitar sound like World War III. I switch them out all the time.

Last is the delay. I like to have all the effects I’m using go through the delay, which is why it’s last in line. If it’s first in line, then it sounds too overpowering. I want the delay to be more subtle. I’ve been using a Boss delay lately, but I’m looking for something a little wilder.

I want my stuff much simpler. The simpler the better, really. None of that shit helps you write songs anyway.

Do you run this board to the amp’s front end, or the amp’s effects loop?

Is there one pedal that you consider central to your tone on this board?

What model/brand of board you use?

What kind of cables do you use?

Believe it or not, Fender cables. I’ve been having pretty good luck with them for the last couple of years.

What kind of power supply do you use?

Voodoo Labs. It fits perfectly on the board.

What are the idiosyncrasies of this setup? Any funny stories from the road?

I have little interest in having an expansive pedal board, or a really complicated system like the guys in Rush or Metallica have. They go to all that trouble putting together a massive guitar and pedal rig and then take the whole thing into a place designed for sporting events. Wow. What a waste of time, soundwise. They may as well be using Marshall half stacks with no pedal boards because the whole thing just ends up sounding like dog shit out in the middle of the arena. Duh. Besides, they’re up there listening to their guitar through in-ear monitors which ruins the whole idea of onstage guitar sound anyway. I hate wearing headphones even when I’m recording, and I don’t think I could make that work live, but whatever. I’m sure they’re happy with all of that, and good for them. I want my stuff much simpler. The simpler the better, really. None of that shit helps you write songs anyway. Ha!

Full interview and photo of Buzz’s chosen pedal will be featured in the Stompbox Book, coming summer 2020.

[…] latest additions to the blog include a pedal board walk-through with Buzz Osborne of the Melvins. As with everything he does, Buzz puts a lot of thought into which pedals he uses and how he uses […]