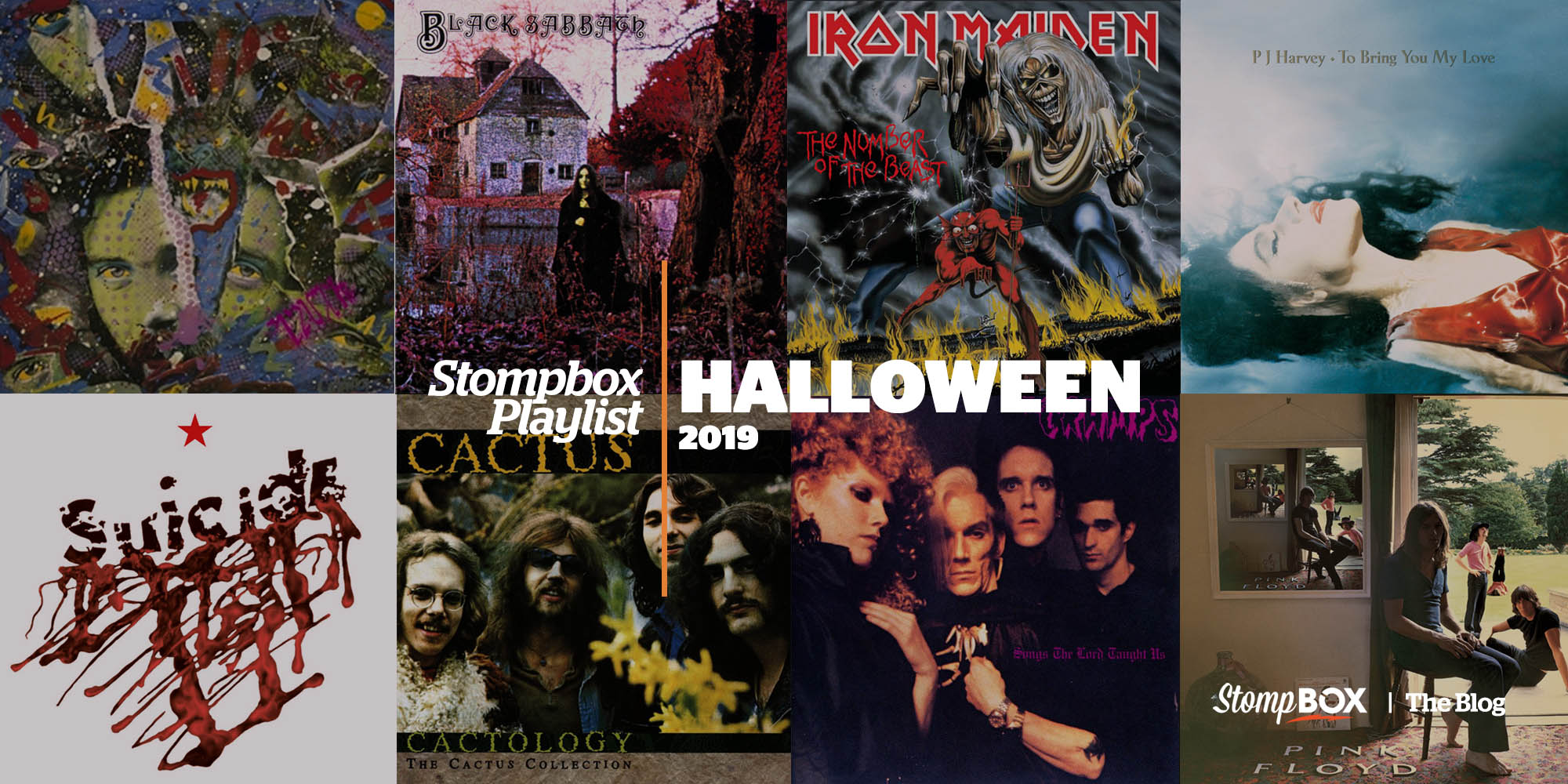 There’s really no shortage of songs out there for a Halloween playlist; after all, ghouls, and various other dark forces have been inspiring songwriters since well before recording equipment was even invented. The trick is, at least from our perspective, is avoiding all the novelty numbers (sorry, Bobby “Boris” Pickett and Warren Zevon) in favor of songs that definitely induce a late-October chill… and, since this is Stompbox, finding songs that feature some cool guitar effects, as well.

Whether you’re getting dressed up for a Halloween party, busting out the Ouija board, or just finishing up that some apples-and-razor-blades project you’ve been working on, these thirteen tasty tracks will surely put you in the proper frame of mind.

Even if Black Sabbath had only recorded this one track, their place on Halloween playlists would be forever secure. Supposedly based on an incident in which Geezer Butler borrowed a Latin-penned occult tome from Ozzy Osbourne, then awoke that night to see a dark figure (not Ozzy) standing at the foot of his bed, “Black Sabbath” still has the power to induce serious goosebumps fifty years after its original recording — and Tony Iommi’s expert use of a Dallas Rangemaster treble booster and either a CryBaby or Tychobrahe wah just makes the sonic onslaught that much more terrifying.

Lou Rawls – Season of the Witch

‘Tis the season for “Season of the Witch,” obviously. But as cool and spooky as the Donovan original is, I’ve long preferred Lou Rawls’ ominously funky 1969 remake — both for his soulful asides about “that dirty, dirty witch,” and for the insane fuzz guitar that stalks him throughout the song like a vengeful demon. No idea who actually played guitar on this track (probably one of producer David Axelrod’s regular session cats), but he or she certainly deserved some extra candy in their trick or treat bag.

The Rattles — The Witch

This 1970 international hit by long-running German rockers The Rattles features some hair-raising cackles and an appropriately intense vocal from singer Edna Bejarano, but it’s the freaky fuzz-wah stylings of lead guitarist Frank Mille that really take the song to the edge of madness.

Queens of the Stone Age — Burn the Witch

With its Salem-centric stomp, this darkly bluesy track was one of the highlights of QOTSA’s 2006 album, Lullabies to Paralyze. Josh Homme’s Stone Deaf FX PDF-2 parametric overdrive gives the rhythm chords their morbid crunch, while ZZ Top’s Rev. Billy Gibbons keeps the hellhounds at bay with a solo that’s tastier than a bowl full of mini-Snickers.

PJ Harvey — Down By the Water

Speaking of witches, it doesn’t get much witchier than PJ Harvey’s eerie blues about a woman drowning her daughter. Though the glitchy, fuzzy bursts adding to the song’s unsettling atmosphere sound like a guitar or bass run through a fuzz box, it’s apparently actually an organ being played through some kind of distortion pedal — an interesting example of how guitar effects can take on unusual properties when paired with other instruments.

Roky Erickson – If You Have Ghosts

You could easily compile a Halloween-appropriate playlist using just Roky Erickson songs, since the late, great singer-songwriter spent much of his post-13th Floor Elevators career penning odes to horror-movie creatures and other grisly subjects. This malevolent midnight meditation from 1980 features stunning lead guitar work from Duane Aslaksen, who uses some kind of octave pedal to achieve that jugular-piercing tone.

The Cramps — I Was a Teenage Werewolf

You can’t have a Halloween playlist without at least one nod to werewolves, just like you can’t really have a Halloween playlist without a selection by The Cramps. This lissome lycanthropic stomper from 1980’s Songs the Lord Taught Us is positively swimming in swampy reverb and amp tremolo — but it’s Posion Ivy Rorschach’s Univox Super-Fuzz that really gives this “Werewolf” its teeth.

The very definition of “badass hard rock,” this 1971 cover of the Howlin’ Wolf classic lays waste to everything that comes near it like some kind of pissed-off elemental spirit. And if you want scary guitar tones, check out the truly sick sounds that Jim McCarty squeezes out of his Ampeg Scrambler distortion pedal!

No one ever delivered creepy psychedelic instros quite like Pink Floyd in their late-Sixties prime. Several recorded versions of every axe murderer’s favorite anthem exist, but this live one from 1969’s Ummagumma heads for some particularly dark places, thanks in part to David Gilmour’s devilish use of his Fuzz Face pedal and Binson echo unit.

Iron Maiden – The Number of the Beast

Did someone say “devilish”? Back in 1982, Iron Maiden raised the ire of Bible-thumpers across the U.S. with this Satanic-flavored anthem, despite the fact that Bruce Dickinson and the boys were not actual Devil worshippers, but rather just some cheeky English lads having some Hammer Horror-style fun. Guitarist Dave Murray used a MXR Phase 90 to add some dramatic sweep to the intro, then kicked his CryBaby wah into “cocked” position for the guitar solo, which surely made the Horned One nod his infernal head in approval.

You can’t have Halloween without some vampire action, and you can’t have a Halloween playlist without Bauhaus’s 1979 proto-goth salute to the silver screen’s most iconic portrayer of Count Dracula. Bauhaus guitarist Daniel Ash claims he didn’t do much to get the cadaver-cold guitar sounds on this track other than to “mess about with a bit of echo,” which most likely came courtesy of the Watkins Copicat echo unit he was known to use in the band’s early days.

From Bela Lugosi, we go to his Dracula co-star Dwight Frye, who provided the inspiration for this dramatic tale of mental illness and institutional incarceration from 1971’s classic Love It to Death album. It’s unclear if lead guitarist Glen Buxton used a Uni-Vibe type of pedal or an actual Leslie speaker for his searing single-note solo at the end of the song; but whatever it is, it’s a wonderfully killer capper.

Just in case shadowy figures, witches, ghosts, vampires and axe murderers aren’t enough to give you a scare, there’s always the prospect of losing your job and being unable to feed your family, and feeling so crushed by the hopelessness of existence that killing your family and yourself seems like the best solution. That’s where NYC duo Suicide were coming from on this terrifying 1977 track, which is guaranteed to freak and/or bum out any unsuspecting listener, especially at night. While Suicide never used guitars, they did love guitar pedals; for this track, keyboardist Martin Rev later recalled that he ran his Farfisa organ through two Electro-Harmonix distortion pedals (possibly Big Muffs, but also possibly Screaming Bird Treble Boosters) to get the pulsing, abrasive sounds he heard in his head.