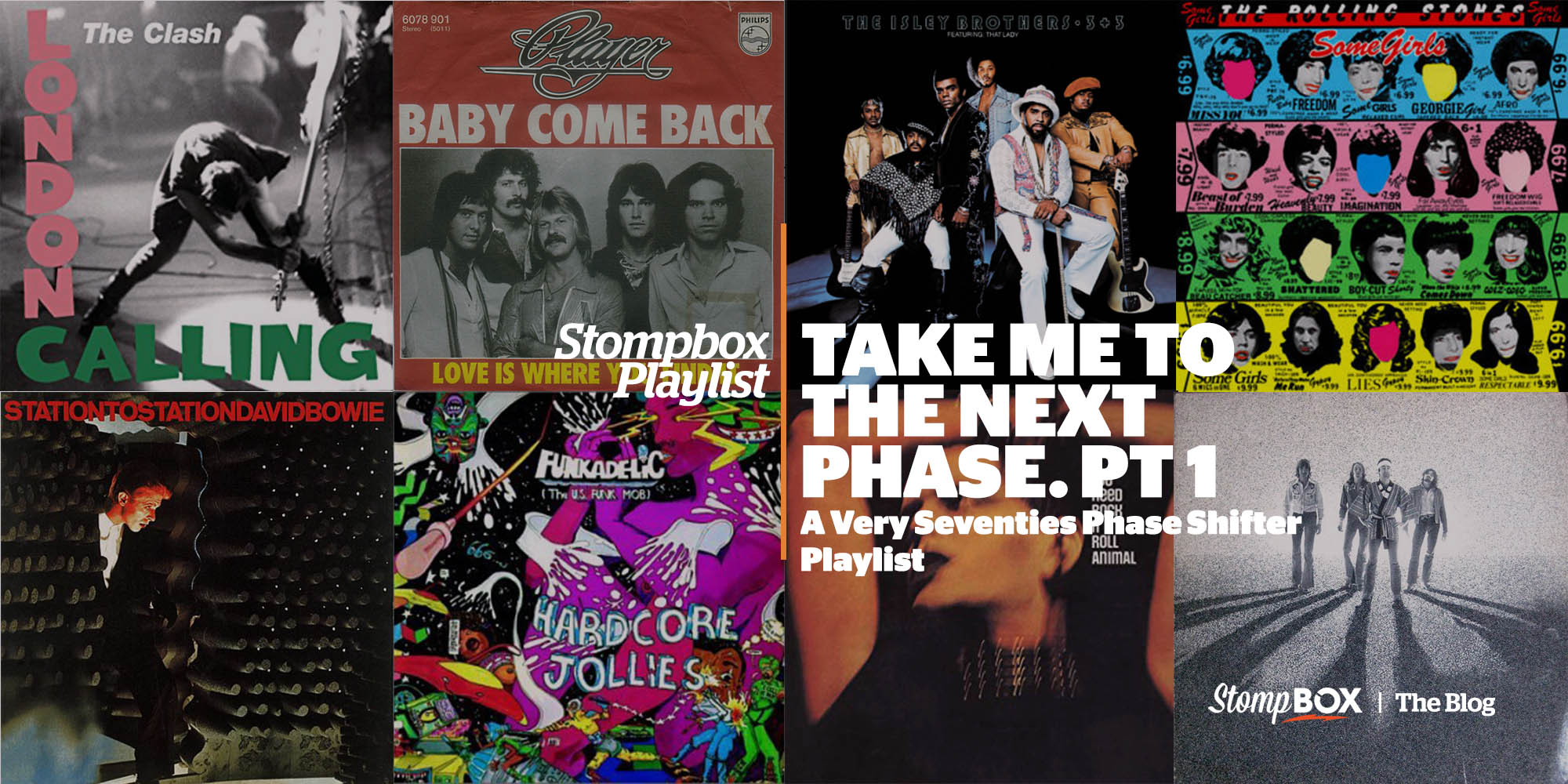 From the early 1970s up till today, the phase shifter (a.k.a. phaser) pedal has been a crucial modulation tool for the professional guitarist. Often erroneously confused with flangers, phase shifters operate on a similar principle — i.e., combining the incoming signal with a slightly delayed version of the source. But where flangers alter the timing of the delayed signal, phase shifters alter the frequency, which colors the sound in a subtly different manner.

The relative merits of each effect can be debated ad infinitum, but what’s not up for debate is the fact that guitarists in the 1970s went absolutely nuts for the phase shifter. Phaser pedals significantly colored some of the decade’s greatest music, and here are twelve prime examples:

Introduced in 1971, the Maestro PS-1 is generally credited as being the first phaser to hit the market. Two years later, while recording “That Lady,” Ernie Isley walked into the Guitar Center on Sunset Blvd. and asked to try out the slightly upgraded Maestro PS-1A. “I was already using a Strat and a Big Muff for fuzz, so I asked for those, as well,” he tells Stompbox. “I plugged in, and I actually discovered the ‘That Lady’ sound right there in the store! Nobody turned around, nobody walked over and asked me any questions, but I was quite excited — I knew I’d discovered a new sound.” Ernie’s futuristic funk sound was new, all right, and it would soon be imitated by a legion of funk and soul guitarists.

Lou Reed’s 1974 live album Rock n Roll Animal gave several Velvet Underground classics a hard-rock makeover, thanks in part to the brilliant twin-guitar arrangements cooked up by Dick Wagner and Steve Hunter. Both guitarists were using an early edition of the MXR Phase 90 pedal — which had only recently hit the market — during this tour, and at least one of them can be heard swooshing like crazy on this arena-ready reworking of Reed’s greatest four-chord anthem.

Pink Floyd — Have a Cigar

Though he’d previously been more of a Uni-Vibe guy, Pink Floyd guitarist David Gilmour jettisoned it in favor of the MXR Phase 90 during the recording of 1975’s Wish You Were Here. On “Have a Cigar,” Gilmour paired the pedal with a Colorsound Power Boost fuzz to get the funky, crying tones that fire the song’s rhythm and lead tracks.

Funkadelic — Comin’ Round the Mountain

Legendary Funkadelic lead guitarist Eddie Hazel began experimenting with phasers — both MXR Phase 90s and Electro-Harmonix Small Stone — in his pedal arsenal around 1975. It’s unclear which pedal he’s using on the opening track from 1976’s Hardcore Jollies, but the funky phasing he unleashes during his guitar solo would stun a Klingon at fifty paces.

Another early adopter of the MXR Phase 90, Jimmy Page used the pedal on stage for several songs during Led Zeppelin’s ill-starred 1975 tour, then busted it out in the studio to achieve the Leslie-esque sounds on this mighty stomper from 1976’s Presence.

David Bowie — Wild is the Wind

Though Station to Station’s credits leave it uncertain whether that’s Earl Slick or Carlos Alomar providing the icy, languorous jangle on Bowie’s 1976 cover of the 1957 Johnny Mathis hit. But since Slick was (and remains) a dedicated fan of the MXR Phase 90, that’s probably his guitar running through the effect.

The brilliant (if sorely underrated) lead guitarist of Mott the Hoople and Bad Company, Mick Ralphs achieved his rich lead tones by running his Gibson Les Paul through an MXR phaser (initially the Phase 90, then upgrading to the Phase 100 when it was released in 1975) set at its slowest speed, and then into an Echoplex and a 100-watt Marshall amp. On the title track of 1977’s “Burnin’ Sky,” you can hear that phaser’s swoop loud and clear.

Sex Pistols — Anarchy in the UK

While the original British punk music was ostensibly all about smashing the musical norms that preceded it, that didn’t prevent the musicians themselves from using the same tools as the rock stars they sneered at. Case in point: Pistols guitarist Steve Jones, who ran his Les Paul into a Marshall, and used an MXR Phase 90 to give his rhythm guitar overdubs on “Anarchy in the UK” a deliciously sludgy sound.

1970s AM radio gold rarely came any shinier than this smooth 1977 hit, which may have been the best Hall & Oates knock-off ever recorded. While we’re unsure what kind of phaser guitarist/singer Peter Beckett used on the recording, there’s no question that it added a certain agreeable je ne sais quois to the song’s hooky main riff.

Keith Richards fell in love with the MXR Phase 100 during the late Seventies, and promptly smeared that baby all over the Stones’ 1978 album Some Girls. One of the sleaziest tracks from arguably the Stones’ sleaziest LP — which is definitely saying something — “Shattered” gets an extra dose of tasty scuzz from Keef’s phased Telecaster.

A staunch fan of the MXR Phase 90, Eddie Van Halen began using the pedal during solos because he liked how it helped his guitar cut through a crappy club mix. Soon enough, though, it became an integral part of his creative arsenal. Explaining how he used it to create the arresting intro to 1978’s “Atomic Punk,” Eddie told Guitar World in 2015 that the “idea for that sound originally came from ‘Light Up the Sky,’ which I had written before ‘Atomic Punk,’ even though ‘Light Up the Sky’ appeared on our second record. After the guitar solo there is a drum break, and you can hear me rubbing my palm on the low E string. One day I decided to try that with the Phase 90. It was an interesting sound, and it turned into a cool song. I’ve never really ever heard that sound from anyone else, neither before nor after I did that.”

A true atomic punk in his own right, Clash guitarist Mick Jones heavily favored the MXR Phase 90 during the first few years of the legendary English punk band’s existence, then upgraded to a MXR Phase 100 in time for the recording of 1979’s London Calling. The sound of Jones’ Phase 100 is all over that landmark double album, and it really brings out “Rudie Can’t Fail”’s sunny skank.

[…] . . . ) Plus, Dan Epstein’s distinctive editorial swoosh applies itself to his Stompbox Playlist, “Take Me to the Next Phase, Pt. 1,” in which he explodes the stories behind the phaser being used by tracks by Pink Floyd, Funkadelic, […]