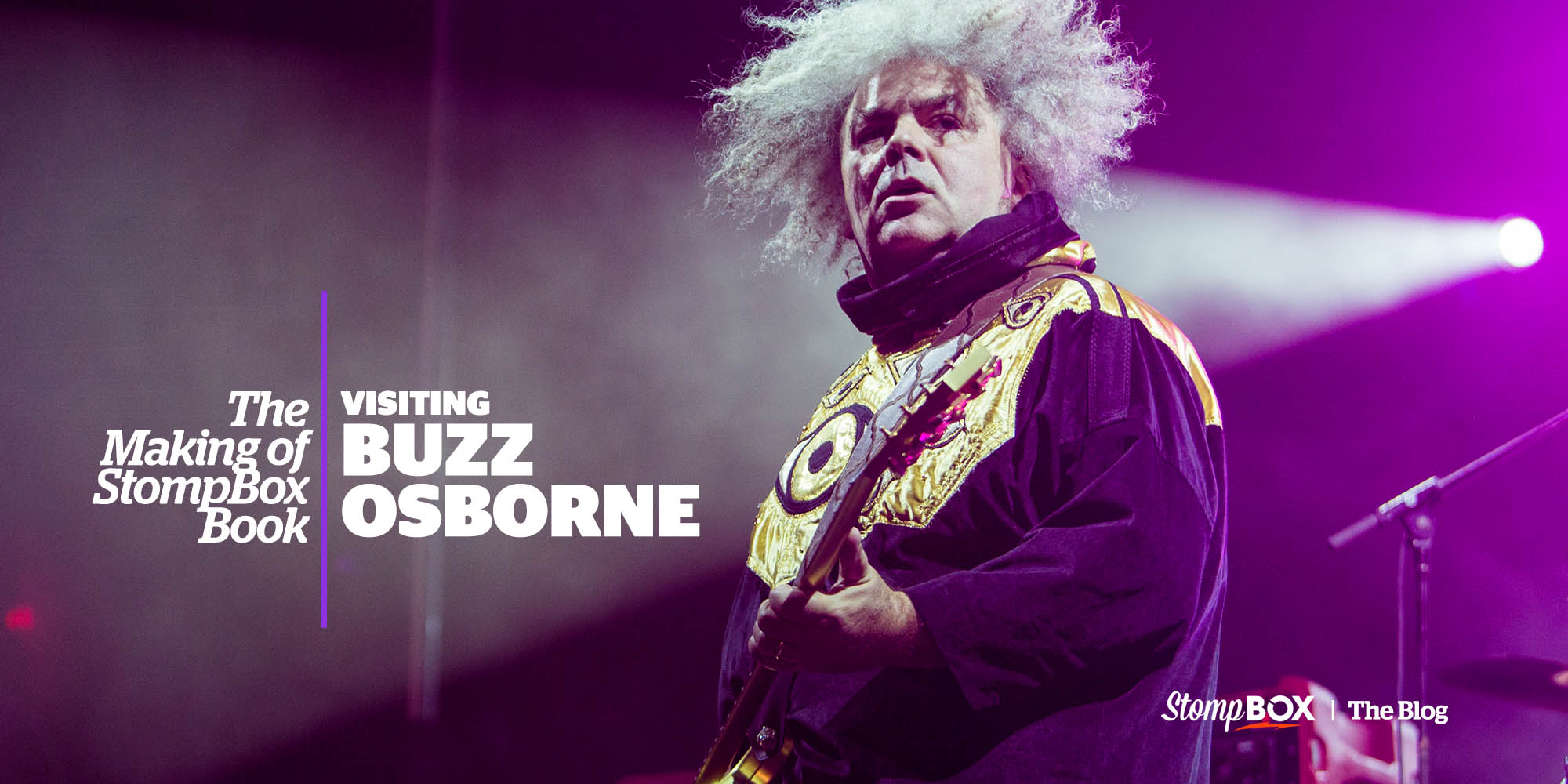 It’s kind of amazing to think that, in my 25-plus years of playing and writing about heavy rock, I’d never actually spoken to Buzz Osborne. Sure, I’d seen the iconic Melvins leader around L.A. many times at shows, movies and even baseball games. You couldn’t miss him, especially if you happened to be sitting behind his frizzy mane — but since the perpetually glowering “King Buzzo” never really seemed to me like the kind of guy who would welcome an impromptu conversation with a total stranger, I always hung back and refrained from engaging with him.

But when I drew the assignment to interview Buzz for Stompbox, he turned out to be far chattier than I’d expected. In fact, once he got really revved up, it became almost impossible to get a word in edgewise. It turns out that Buzz really, really likes to talk about guitar gear, and thus our conversation wound up covering much more than just the Hilbish Design Melvins Pessimiser pedal that he helped create.

What are some of your favorite pedals?

There’s two that have really changed my thinking, and how I perceive guitar playing. One was originally the Rat distortion pedal, the one from the ’80s. I don’t have my original one anymore; I think it got swiped. But the original Rats were big blocks, a lot bigger than the ones they have now. Before that, I’d used a MXR Distortion Plus, which had two different knobs – output and distortion. But what switched me on the Rat was that it had a tone control. A distortion box with a tone control, that was the game-changer for me.

And then, on a much more grand scale, there’s Boss ODB-3 bass overdrive. I was introduced to it when our bass player at the time, Kevin Rutmanis, was using one. We were at the practice space, and I thought, “Oh, bass distortion? Let me try that.” I plugged that sucker in, and I was like, “Baby, where have you been all my life? [laughs] Bass distortion, my ass – this is the best guitar distortion I’ve ever fucked played through! I cannot believe that no one uses these for guitar!” It blew my mind.

What I realized is that most guitar distortion boxes concentrate on creating too much distortion, you know? And the bass distortion boxes — for some reason, they don’t think that bass players want as much distortion, so it’s a little calmer. But the fullness of it is just fucking massive; I was like, “Oh my god, this is exactly what I want!” I dicked around with it a little bit, and after about five minutes, I was like, “I’m in! I’m buying one of these motherfuckers to-day!” I never looked back.

And so, with that in mind, I designed my own distortion box recently, the Pessimiser, with the idea that I wanted to design a distortion box that was for bass or guitar. And that’s what I did. But what I think would be a good thing is a distortion box with massive amounts of distortion and a compressor built into it. My second favorite pedal would be a compressor – I use a MXR right now for that. I think compression is one of the most undervalued guitar effects that there is.

What’s the difference for you between recording versus playing live?

I view playing in the studio and playing live as two completely different things. It’s like getting steak at the supermarket, versus going out and hunting for it – shooting an elk and chopping it up, as opposed to just buying it. Live is like going out in the woods and hunting for something; the studio is like going to the supermarket and getting whatever you want. The effects or amps I use when recording have more to do with what I think will make the song right, and less to do with what we do live. I rarely use the same setup for recording that I do on stage. I learned a long time about that blasting amps in the recording studio sometimes has diminishing returns. Not to say that we haven’t done that. We’ve done everything.

What is your approach to your rig?

As a guitar player, I really, really want to walk out onstage knowing that I’m the only person in the world that’s using a set-up like this. My speaker cabinets, my guitars, my amplifier – everything is different than everybody else’s. That’s what I want: to be different than everybody else. When you come to see us, I want you to see something that you haven’t seen before, from the ground up. It’s not going to be, like, “Oh, look – he’s using a Marshall stack with a Stratocaster with a Big Muff!” I mean, a Marshall with a Stratocaster, that’s great, but Robin Trower already perfected that, and so did Hendrix. So what are you going to do with it? Let’s see! It better be good! And I’m going to get a chair and a bag of popcorn, because I want to watch you blow this! [laughs]

Who are some other guitarists you admire?

Jon Spencer. Jon is, I think, the most underrated guitar player out there. I really, really like Jon, and I think he is really underappreciated. His sensibilities are amazing, and he’s got really well thought out, odd gear. He’s just smart about it, you know?

And Paul Leary from Butthole Surfers. That guy, you talk about “outside the box” – with that motherfucker, there’s not even a box! He’s one of my top five favorite guitar players, easily. We did a whole album with him as the second guitar player in the Melvins [2014’s Hold It In]. When you’re working with a guy like Paul Leary, you take him off the leash, and you let him go, and you don’t tell him a goddamn thing – because what could I tell him? You don’t dictate to a guy like that; you get better results if you turn him loose. You let the artists do their work!

Full interview and photo of  Buzz’s chosen pedal will be featured in the upcoming Stompbox Book, coming summer 2020.