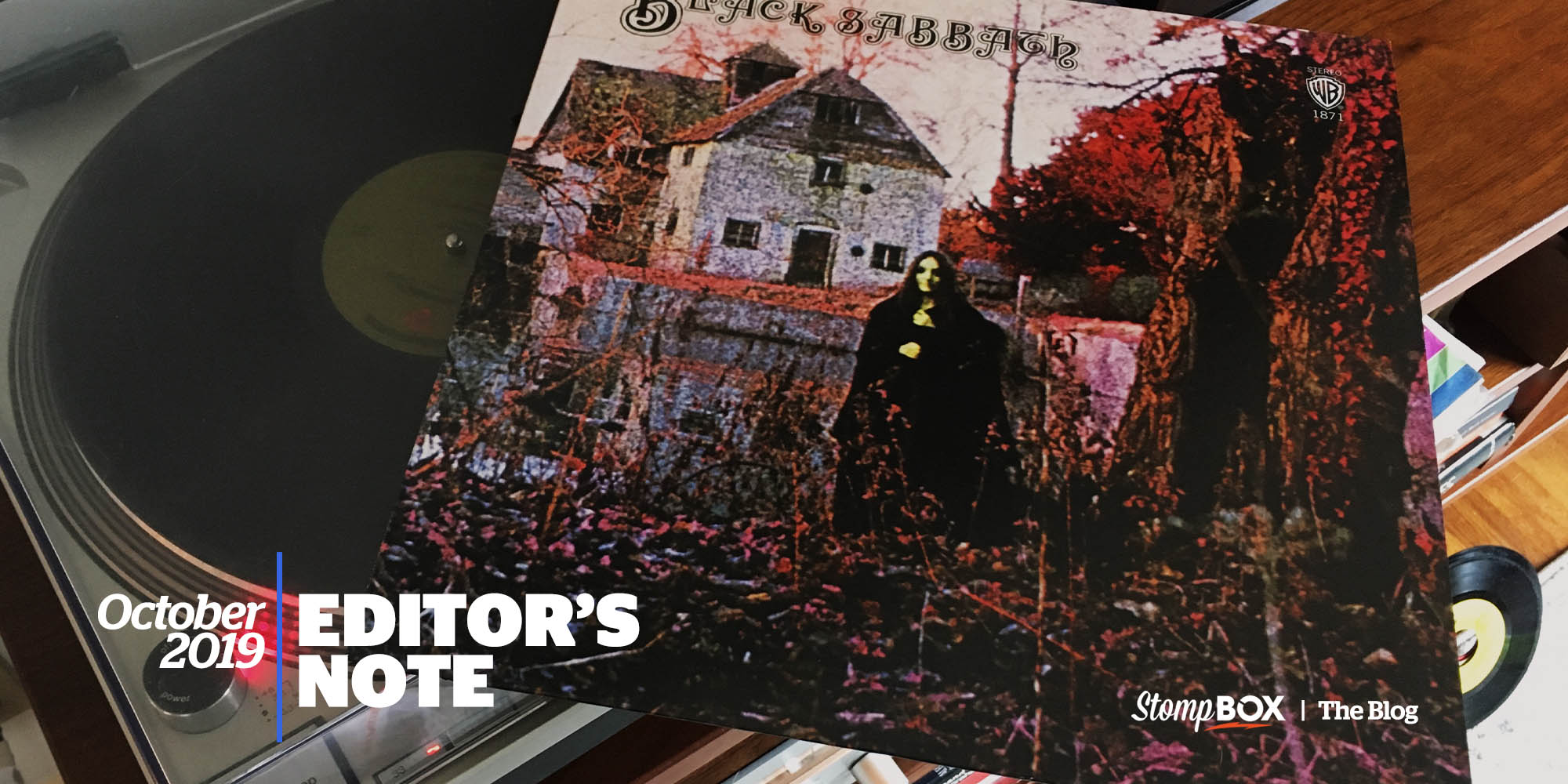 October is here, which means it’s time to carve up a pumpkin or two, pull those Halloween decorations out of storage, and — of course — cue up some dark and stormy sounds.

Black Sabbath’s self-titled first album always sounds amazing, but it sounds even better at this time of year, when the temperatures start dropping and the ominous shadows of dusk start creeping ever earlier. Tony Iommi’s overdriven guitar is terrifyingly raw and visceral, like an elemental force unleashed from the Underworld, while Geezer Butler’s basslines slither and snap like the serpents atop Medusa’s head. While the surging riffs of “N.I.B.,” “The Wizard” and the haunting title track are powerful enough on their own, Iommi used a Dallas Rangemaster treble booster to add some teeth to his tone (or sharpen the fangs that were already there), and both he and Butler employed a wah pedal (either a Tycobrahe or a CryBaby) for additional tonal shaping.

Indeed, most of our Halloween playlists would sound significantly different without the existence of outboard guitar effects. From gothic atmospherics to death-metal grind, effects pedals have done a lot to make scary songs even scarier. And speaking of scary: September was a scary-good month for Stompbox, so it’s time to catch you up to date on what’s been happening over here…

The Stompbox blog featured a preview of our excellent interview with bassist and pedal collector Juan Alderete (The Mars Volta, Marilyn Manson, Racer X), along with some of Stompbox generalissimo Eilon Paz’s drool-inducing photos of some of Juan’s prized pedal possessions. And Jarod Woznik, guitar tech for Lita Ford, gave us some cool insights into the Queen of Noise’s surprisingly straightforward pedal board.

Behind the scenes, we’ve been reeling in a bunch of enlightening interviews with a wide array of fine musicians, including Joe Satriani, Elliot Easton, Andy Summers, Kaki King, John Baizley and Gina Gleason of Baroness, John Dwyer of Thee Oh Sees, and Pedrum Siadatian of The Allah-Las. Our search for a Mick Ronson pedal led us to the awesome Rick Tedesco, who is not only one of the world’s biggest Ronno fans, but also owns The Guitar Hangar, Brookfield, Connecticut’s coolest guitar store. Our intrepid Tzvi Gluckin continues to rack up cool chats with effects innovators — including EarthQuaker Devices, Cusack Music, Death By Audio, Analogman, Joe Gore and Wampler — and we finally got our hands (and Eilon’s lens) on one of the Rev. Billy Gibbons’ Bixonic Expandora pedals, a distortion box that the legendary ZZ Top leader has been swearing by for over two decades.

There’s still more exciting stuff cooking as we cruise ever nearer to our publishing deadline. To stay plugged in, be sure to follow us on Facebook, Instagram and/or Twitter, where the news breaks on a much more regular basis. I’ll holler atcha again next month — but until then, don’t be scared to turn those knobs up to ten!