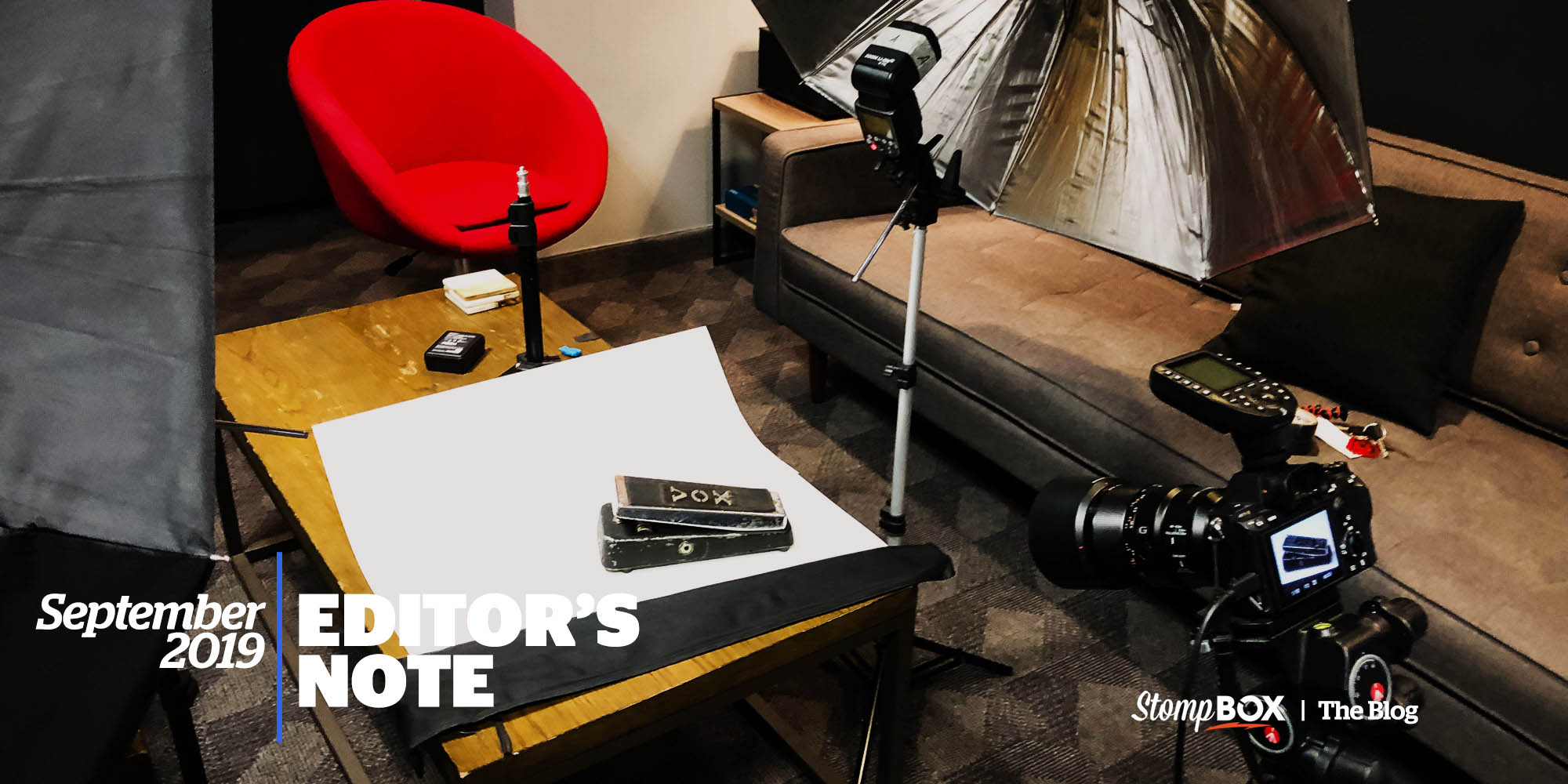 I’ve been pulling out my Funkadelic LPs these past few days, in honor of the passing of artist Pedro Bell. Bell (or “Sir Lleb,” as he was known among the Funkateers) was perhaps the great unsung hero of P-Funk; he never played a note on any of their records, but his retina-searing album cover artwork perfectly complemented the music within, and also added a whole ‘nother dimension of freakiness and funkiness to the P-Funk aesthetic. You may not know Bell’s name, but his acid-fried space/horror/funk imagery remains inseparable from albums like One Nation Under a Groove, The Electric Spanking of War Babies or (my personal favorite among his covers) Let’s Take It to the Stage. Rest well, Sir Lleb…

Speaking of unsung heroes, I’ve been thinking a lot lately about how effects pedals are really the unsung heroes of popular music. I mean, I must have heard Jimi Hendrix’s “Voodoo Child” and Eddie Van Halen’s “Eruption” solo hundreds of times as a kid, and never once did it occur to me that there was something else between the guitar and the amplifier, something that was helping to color the sound and shape its character. Only after I got an electric guitar of my own did I realize that there was a whole wonderful world of guitar effects out there, that most players choose their pedals with the same care that they choose their axes and amps. Without effects pedals, I learned, Jimi and Eddie would have still been incredible players, but their sonic palettes would have been considerably more limited. With Stompbox, we really hope to increase the general awareness and understanding of these magical devices — not just what they do, and why they’re so cool, but also how they’ve become an important and integral part of the music we love.

Stompbox photographer and generalissimo Eilon Paz recently spent some time at the Rock and Roll Hall of Fame in Cleveland, photographing a true holy relic — one of Jimi’s wah-wah pedals — for our forthcoming book. (Many thanks to Stasia Karel and Jeff Gold for making it happen!) While in Ohio, he also paid a visit to the Akron HQ of EarthQuaker Devices, one of our favorite pedal builders. Expect to see some photographic evidence from that visit here soon, along with Tzvi Gluckin’s interview with EarthQuaker co-founder Jamie Stillman. Tzvi is the latest addition to the Stompbox stable of writers, and we’re very stoked to have him on board; not only does the guy really know pedals, but he’s quite literally the most rocking orthodox rabbi we’ve ever met. Also keep an eye out for Tzvi’s enlightening interviews with such pedal innovators as Wren and Cuff and Chase Bliss Audio.

Our latest additions to the blog include a pedal board walk-through with Buzz Osborne of the Melvins. As with everything he does, Buzz puts a lot of thought into which pedals he uses and how he uses them; and he doesn’t suffer fools (or complicated rigs) gladly, as his hilariously pointed stories about Tool’s former guitar tech and Metallica’s arena setups attest. And don’t miss Matt Diehl’s interview with Pete Celi of SoCal pedal wizards Strymon, Willian Weir’s history of the Maestro Ring Modulator, or our Ibanez Tube Screamer playlist, which compiles 13 tasty examples of the legendary green tone-fattener in action.

There’s plenty more good stuff on the way, including interviews with Baroness, Adrian Belew, Nuno Bettencourt, Sean Lennon and Sarah Lipstate, so don’t touch that dial — unless, of course, you think you can get a really cool sound out of it!