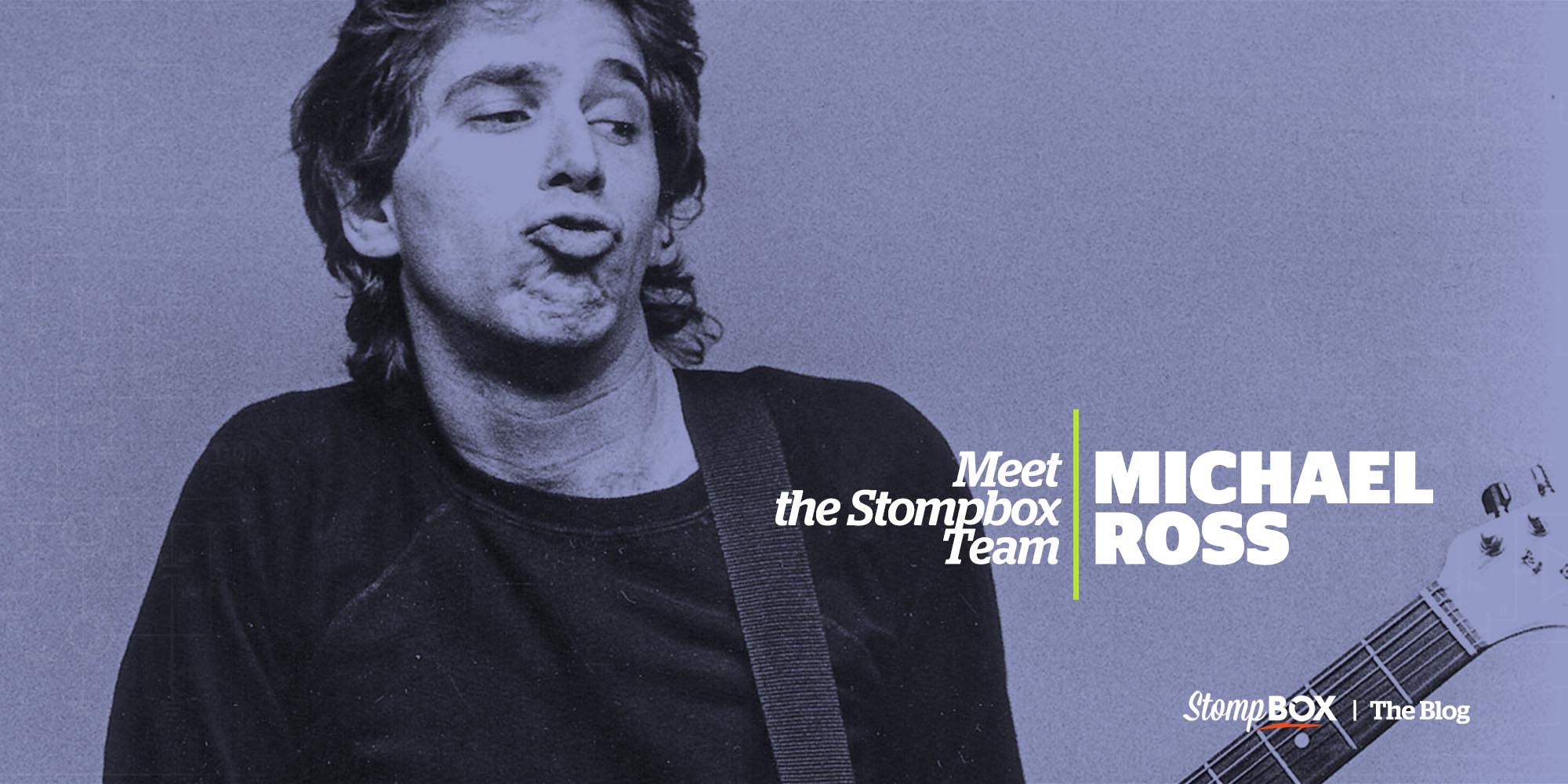 Michael Ross has been writing about music and playing in various bands from coast to coast for decades.  Stompbox caught up with him to hear about his prismatic journey through music and journalism; the one that led him to his now home in Nashville as the head of the self-proclaimed “zine for adventurous guitarists,” Guitar Moderne . This Bible for “out” sounds spans from beloved iconoclasts to the most unknown of drone. Indeed, since Ross started his essential blog, it’s become home for a community of six-string stylists who truly push the envelope – with their playing, with their gear, and yes, with their pedals…

You’ve had an extensive career, working for many publications. How did you get into music writing to begin with?

The first music writing I did was for Stereophile: a friend of mine got me a gig writing record reviews for them. That was a long time ago. When I moved to San Francisco, I met Joe Gore, who was writing for Guitar Player. He knew I could write, so when he left to go on the road with PJ Harvey, and Guitar Player needed people to take up the slack, Joe recommended me. I started writing gear reviews for them, and soon after pitched my first feature to James Rotondi.

When I moved back to New York, I was writing for some other magazines that are no longer around, like Guitar One. I would call them up and chat up whomever the gear editor was to get assignments. One time, I called and asked to speak to the gear editor du jour. They said they didn’t have anybody and asked me if I wanted to do it! That’s how I became the gear editor at Guitar One. I’ve also been writing for Guitar Player for forever and started writing for Premier Guitar when they came around. So yeah I’ve been doing this for a long time, for a lot of different people.

So tell me about your Guitar Moderne project: how did that concept develop?

It all started when I got laid off from Guitar One shortly before they folded. I started to see that print magazines were an endangered species. I was into avant-garde guitar, and had seen a lot of videos online of people doing fresh and new things with computers, combining a lot of pedals, that kind of stuff.

I was finding all these great guitar players doing interesting things. It occurred to me, why not start a magazine devoted to this? In fairness, Guitar Player and Premier Guitar were allowing me to write about these guitarists – but they also have to cover country, jazz, and rock. There’s only so many pieces that can be published, and I was finding way too many people I was excited to write about to depend on those places as an outlet. I figured a blog would give me a chance to write about all those people, and a place to share all these great videos. After a couple of years, I got some advertisers and we were off to the races.

So how did you go down the rabbit-hole of the avant-garde experimental artists? What sparked that interest?

Being old as dirt, when I was growing up, the emerging guitar players were people like John Scofield, Bill Frisell, and John Abercrombie. Those guys were all new voices on the instrument, so that interest started from a young age for me.  I later discovered a Norwegian guitar player Eivind Aarset who was using a lot of pedals and a laptop to create new sounds. I’d already experimented with looping guitar in a couple of pop bands in San Francisco. I played with an avant-pop band called the Potato Eaters, with Gino Robair on drums. Gino’s one of the foremost avant-garde musicians, and in those days, he exposed me to a lot of stuff.

In New York, when I was the editor of Guitar One, I was also helping out with the American edition of Future Music, which interestingly enough was also edited by James Rotondi. I started doing a plug-in column for them, which got me involved with electronic music. Through James, I met Dave Hill, the head of Ableton Live in America at that time. I started getting involved with the Ableton community in New York and discovered a lot of guitar players doing stuff with computers. The combination of all of those experiences got me involved, so I started performing with a laptop and guitar, too.

That type of music has become more popularized. How does that impact what you do?

It has been really heartening, especially in light of my magazine, to see it keep growing and growing. There was a period there where it was all just guitars plugged into Marshalls, just like it had been for forty years. In more recent times, people are doing interesting things with pedals and sounds. I guess it started with bands like My Bloody Valentine in the ’90s, but it just kept growing and growing. This band Tera Melos with Nick Reinhart is amazing. Since I’ve started doing the magazine, word has gotten out to where musicians from all over the world are tracking me down and sending me recordings. I don’t have to go looking for it anymore.  Andy Summers’ management called me to interview him last year, when he brought out his avant-garde record Triboluminescense, for example.

What about your own music? I know you’ve toured with people like Eric Andersen and James Armstrong. How did that unfold simultaneously?

It’s a long timeline, and I started late. I didn’t really play much in high school, or when I first went to college, except for a little folk music. After I dropped out, I played more. I started out with a Sheraton Hotel show band playing  six nights a week, five sets a night—that was my musical college.  I left them in Springfield, Massachusetts to play with a soul group. They weren’t making any money, but luckily I got a call to come back to New York to play country music, which I had never played before. It was during the first “country scare” of the ’70s. So there I was, making a living playing country music in New York for a while. Who knew?

I toured with Eric Andersen in the ’80s and again in the early 2000s. A friend of mine knew the drummer that was playing with Eric, who told him they were looking for a guitar player. I went up to Woodstock to audition and then went on tour with them. I actually got to meet Joni Mitchell while playing with him. In San Francisco, I played with James Armstrong. I toured with him for two years, and left when I decided to move back to New York.

While in New York, my wife and I decided it was time for a change. I had been going down to Nashville for many years for the National Association of Music Merchants show, so we decided to go all in. We moved down here, and oddly enough there was a guy promoting avant-garde shows! So I got to do a bunch of laptop gigs, and now I’m also playing with a country band. If it’s blues, roots, or avant-garde, I’m interested. The stuff in between, not so much.

That’s great to take part in multiple genres How do you approach making all these different sounds?

My attitude is this: 95% of everything is crap – so if I move between genres, I can cherry pick the top 5%, That way I’m always listening to or playing great stuff. If you stick with one genre, you start lowering your standards. Also, since there’s so much great music out there, it’s hard to listen to everything in one genre.

Who would you say are some of the top 5% that you’re listening to right now?

In the Americana world, Lee Ann Womack and her daughter Aubrie Sellers are great. This guy Adam Wright just put out a record that is excellent. In the more avant-garde guitar world, there’s Eivind Aarset, whom I mentioned, and this guy Stian Westerhus. Norway, and Scandinavia in general, have become hotbeds of that kind of stuff. I just did an article for my magazine about this Norwegian band, Pom Poko – they’re interesting and different. For the blues, I like young-ish guys that are a part of the whole Joe Bonamassa, Kirk Fletcher, Matt Scofield scene. In jazz, there are so many. You’ve still got older guys like John Scofield doing great work. Bill Frisell recently made a great record with the trumpet player Cuong Vu called Change In the Air. Bill is always doing great stuff. There are also young people too like Julia Lage who are just superb.

Tell me about a specific interview you’ve conducted that really sticks out to you.

I have one story that sticks out. I was interviewing Bill Frisell, whom I’ve known for years, and I was telling him  how I’d learned one of his songs. I showed him how I was playing it. Bill looked at me and said, “I never thought of doing it that way.” That response probably made my whole life. That was certainly a memorable moment.

Catch up with Michael’s writing at Guitar Moderne 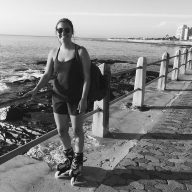