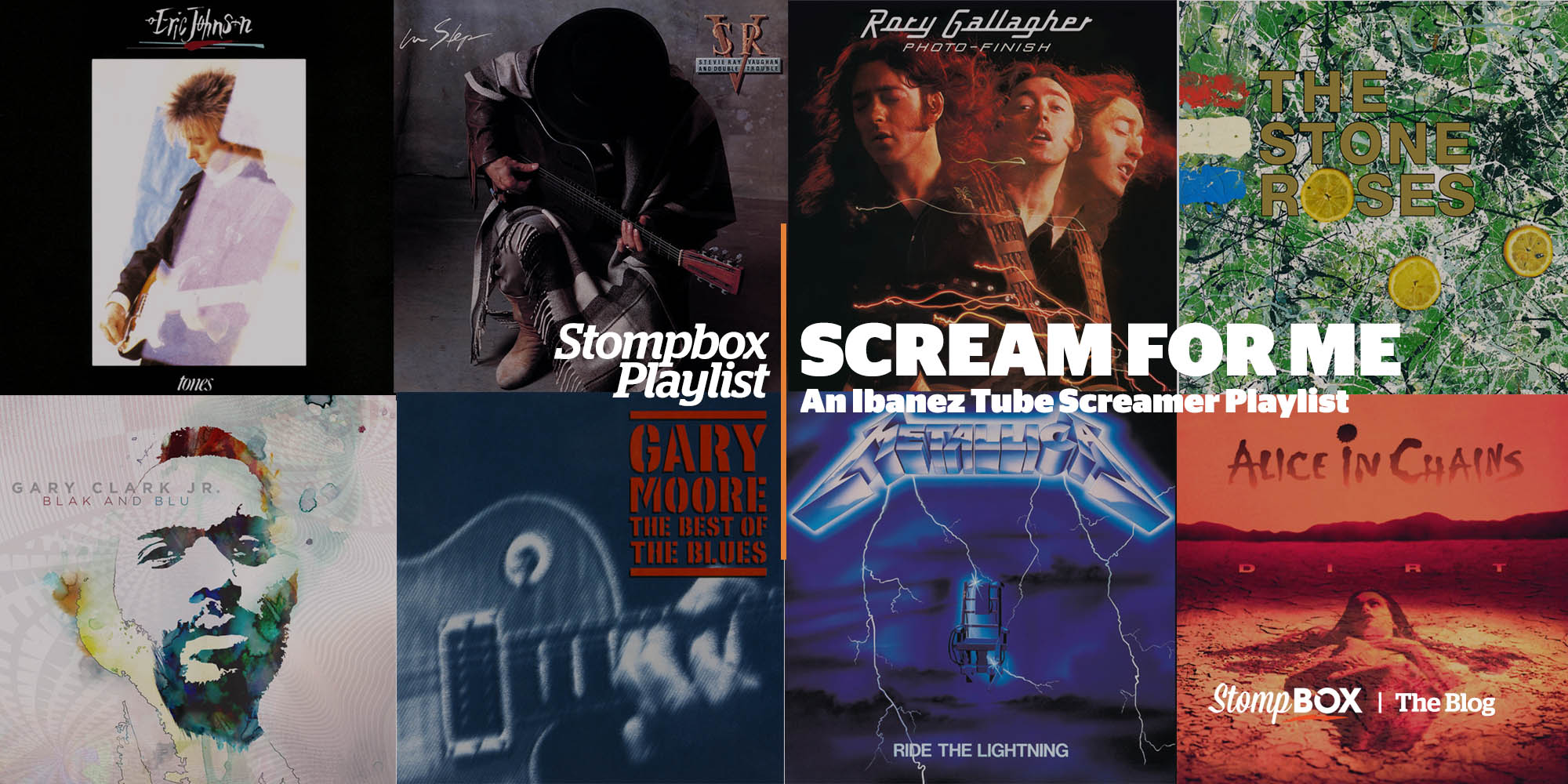 Since its introduction in the late 1970s, the little green stomp box known as the Ibanez Tube Screamer has been responsible for a whole lotta glorious noise. Certainly, there are crazier overdrive pedals on the market, but the Tube Screamer continues to be mainstay in the effects arsenals of guitarists everywhere, and with good reason. Need a fat, clean boost for your solos? Need to elevate your fuzz above the roar of your band? Need to beef your amp’s mid-range, or turn it “up to eleven” by overdriving its tubes, while still retaining its overall sonic character? The Tube Screamer will definitely get you where you want to go.

In a 2013 interview with Premier Guitar, Susumu Tamura, the man who created the original Tube Screamer circuit for Maxon (who produced the first incarnations of the pedals for Ibanez), recalled the concept behind it. “From our view, we simply had to come up with a pedal to compete with the BOSS OD-1 Overdrive and MXR Distortion+,” he explained. “We were looking to make a pedal that was not hard-clipping like fuzz or distortion, but more like the overdrive obtained from tube amps. We settled on [the Tube Screamer’s] ‘boxy’ tone, with the mid-range emphasized, because it worked well with a wide variety of guitars and guitar amplifiers, including both Les Paul-style and the Stratocaster-type guitars. By controlling the wild bass volumes of standard fuzz and distortion, as well as the jarring overtones of the upper register, a more versatile pedal was developed.”

The pedal’s inherent versatility has been reflected by the wide range of artists who have adopted it over the last forty-plus years — as well as the sheer number of imitations that have followed in the wake of the original TS-808. Ibanez has continued to tweak the pedal, as well, producing such variants as the TS9, TS10, TS 5, TS7, TS808HW and TS9DX, all of which come in shades of green similar to the original.

For this playlist, we’ve compiled 13 tasty examples of the Ibanez Tube Screamer at work.

A devoted Tube Screamer user for nearly forty years, Johnson used it to achieve his patented violin-like clean tone, as well as to boost his Fuzz Face when the occasion called for it. You can hear both elements in this Grammy-nominated track from 1986’s Tones. Though he’s certainly experimented with other tube screamers since, Johnson keeps coming back to the TS-808. “Old Tube Screamers and old Fuzz Faces, they seem to kind of go together,” he told Premier Guitar in 2018.

Another Tube Screamer-devoted Texan, the late, great Stevie Ray Vaughan played through TS-808s, TS9s and TS10s at various points in his career; if you’re chasing that classic SRV lead tone, a Tube Screamer and a Strat are the key pieces of the puzzle. During the making of 1989’s In Step, he reportedly recorded several tracks with his guitar running through a TS9 and a TS10, which might account for the delicious fatness of this song’s outro solo.

Texas Tube Screamer mania continues with Austin native Gary Clark, Jr., who came to the TS9 via SRV. “The Tube Screamer is a go-to pedal,” he told Music Radar in 2011. “I was wondering what Stevie was steppin’ on, and it was one of those green boxes.” You can definitely hear Gary steppin’ on one during the title track of 2010’s Bright Lights EP.

The late, great Rory Gallagher was famous for his “let’s get to work” approach to playing and performing, and the TS-808 was an integral part of his tool box from the late Seventies onward. On this thumping track from the live 1980 LP Stage Struck, you can hear him using it to coax an extra growl out of his amps, and to make his slide solo really sing.

Another TS-808-loving guitarist who left us too soon, Gary Moore utilized the Tube Screamer to prolong the already-impressive sustain of his Les Paul — which you can hear in all its jaw-dropping glory on this incredible live 1993 version of his classic track from 1978.

A Tube Screamer user since the late Seventies, Kirk Hammett told Guitar Interactive in 2018 that a TS-808 was the first distortion pedal he ever bought. “It had that warmth, that tube sound, that tightness, that fullness that I needed,” he explained. “Because the amp that I was using wasn’t the greatest amp… I got the Tube Screamer and it made that sound a little bit better. But then, like six months later, I got a Marshall head and a cabinet. And I plugged the Tube Screamer in and it was that much better. And I pretty much haven’t stopped ever.” You can hear his TS-808s and TS9s in action throughout Metallica’s catalog, but his solo tone on 1984’s “Fade to Black” is especially sweet.

Dokken lead guitarist George Lynch achieved the massive crunch heard on 1987 Back for the Attack LP by driving a Marshall Plexi head with a TS-808, and then further pushing the mids with a BOSS GE-7 equalizer pedal. The results were pure Eighties shred deliciousness!

Alice In Chains — Them Bones

For AIC’s first two albums, 1990’s Facelift and 1992’s Dirt, Jerry Cantrell fired up his Reinhold Bognar-modified Marshall and then used a TS-808 to fortify its in-your-face mids. This track from Dirt is a prime example of how a Tube Screamer can add extra meat to an already-beefy rhythm sound.

Blues dudes and hard rockers aren’t the only players who love the TS9 — prog-metal shred-master Jeff Loomis also used one to fatten his seven-string tone throughout the recording of Nevermore’s 2000 epic Dead Head Heart in a Dead World.

The Stone Roses – She Bangs the Drums

1980s and 90s Brit-poppers loved the TS9, as well. For Stone Roses maestro John Squire, the little green box was a key ingredient in his ringing tone, which can be heard in full flight on the band’s first UK Top 40 hit.

Oasis leader Noel Gallagher was a huge Stone Roses fan, so it makes sense that he would have picked up on what fellow Mancunian John Squire was using on his pedal board — and that the Tube Screamer would get a good workout during the recording of Oasis’s early albums. “I used to just turn up the amps as full as I could get them — I never used distortion pedals or anything like that,” he told Guitar Player in 2000. “But I started collecting Ibanez Tube Screamers, and I’ve got an old ’70s model [a TS-808], which is the best pedal I’ve ever come across. So now I get a really good rhythm sound, and then kick in a Tube Screamer for the guitar solos. I like that so much better than having a loud guitar sound going all the time.”

Social Distortion — Reach for the Sky

Punk rockers dig the Tube Screamer, too. Just ask Social Distortion’s Jonny “2Bags” Wickersham, who used a TS9 to further saturate his amps during the recording of the band’s 2004 album, Sex, Love and Rock ‘n’ Roll, resulting in the sustained roar you hear on the song’s opening track.

As any fan of Joan Jett knows, she’s not one for a lot of bells and whistles in her rig — and once she finds something she likes, she sticks with it. Case in point: The Ibanez TS9DX Turbo Tube Screamer, which has been sitting on top of her Music Man amp for well over a decade, and which can be heard snarling at full blast on this glammy stomper from her 2013 album Unvarnished. “Her sound comes from her hand,” Jett’s guitar tech Zach Nagy told Premier Guitar in 2015. “She’s very plug-and-play. It’s straight up rock ‘n’ roll.” It is, indeed.

[…] Celi of SoCal pedal wizards Strymon, Willian Weir’s history of the Maestro Ring Modulator, or our Ibanez Tube Screamer playlist, which compiles 13 tasty examples of the legendary green tone-fattener in […]