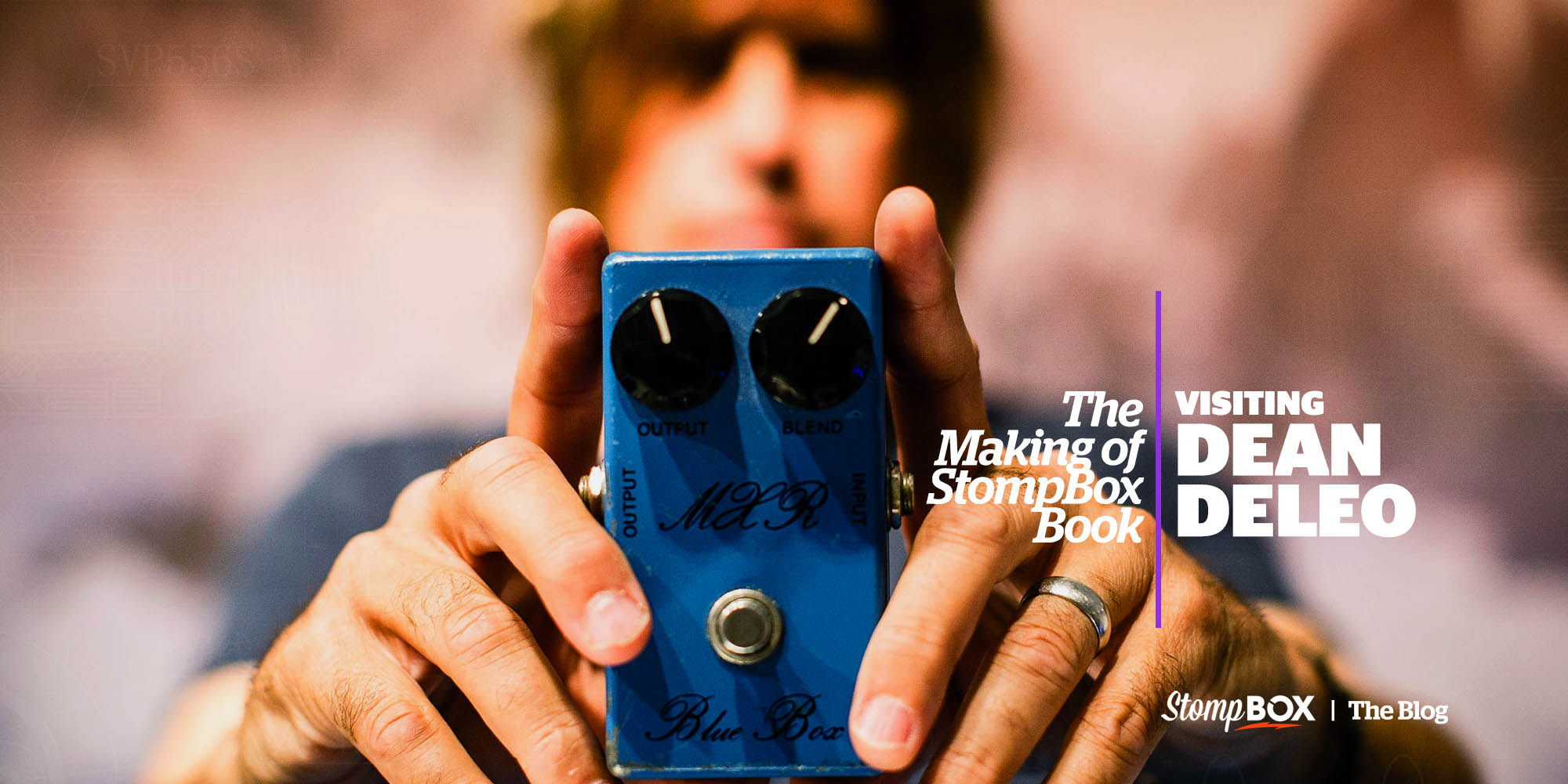 With his insatiable hunger for cool sounds, and his infectious enthusiasm for all manner of guitar gizmos, Stone Temple Pilots co-founder and guitarist Dean DeLeo pretty much embodies the spirit of Stompbox.

One of the first artists to give this project a hearty thumbs-up, Dean cordially invited Eilon Paz to meet him in Los Angeles for a photo shoot at the home studio of Cal Campbell — son of country great Glen Campbell, and Dean’s longtime friend and collaborator. Though the original plan was to focus on Dean’s vintage Ampeg Scrambler pedal, he simply couldn’t resist pulling one amazing pedal after another out of his studio suitcase — a literal “bag of tricks” that would make any pedal aficionado drool with envy.

“The insides looked like rainbow candy to a guitarist’s eye,” Eilon recalls. “Even though we had already decided which pedal to shoot, we played around with all of the pedals he brought out. Of course, I took the opportunity to take photos of all the pedals he had. With all of these shoots, I love snagging as many candid shots and pictures of gear as I can. These moments beg to be documented — and let’s be real, I can’t help myself.”

Friendly, welcoming, and totally down-to-earth, Dean spent over two hours with Eilon, geeking out with him about his favorite pedals and devices, some of which he’s owned since his teens. “It was pretty awesome to just hang out and hear him recreate his iconic sounds casually,” Eilon recalls. “It’s an unforgettable music moment.”

The two hit it off so well, in fact, that by the end of the afternoon, Dean asked Eilon if he would be willing to take a portrait of him for an event that he was doing with the Adopt the Arts foundation, a non-profit co-founded by Guns N’ Roses’ Matt Sorum, which funds arts programs in public elementary schools. Eilon happily obliged… and a year later, Guitar World reached out to him, asking if the magazine could use his portrait of Dean for their cover story on the 25th anniversary of Core, STP’s legendary debut album. A pretty cool development, to say the least!

“I’m letting out all my secrets, Eilon,” Dean laughed at one point during the interview, and of course we were only too happy to listen… and share them with the rest of the world. Here, then, are some of Dean’s favorite pedals and mini-amps from his collection, along with commentary from the man himself about how he uses them and why he loves them.

“That’s the granddaddy of all pedals,” says Dean, who picked his up while on the road with STP in the early 90s. “There wasn’t many made, and they’re very rare, especially that one there with the script logo on it. I used that pedal a lot on the last record we did with Scott…”

The AD9 — a warm-sounding delay pedal that Dean has owned since the 1970s — has two outputs, which allows the player to achieve some impressive stereo delay effects. “You can do cool things with it,” he adds, pointing to STP’s “Too Cool Queenie” from 2001’s Shangri-La Dee Da as a prime example. “When the song comes out of the first chorus, and you hear [makes a swirling, sputtering sound], that’s all done by turning the dials of the pedal.” 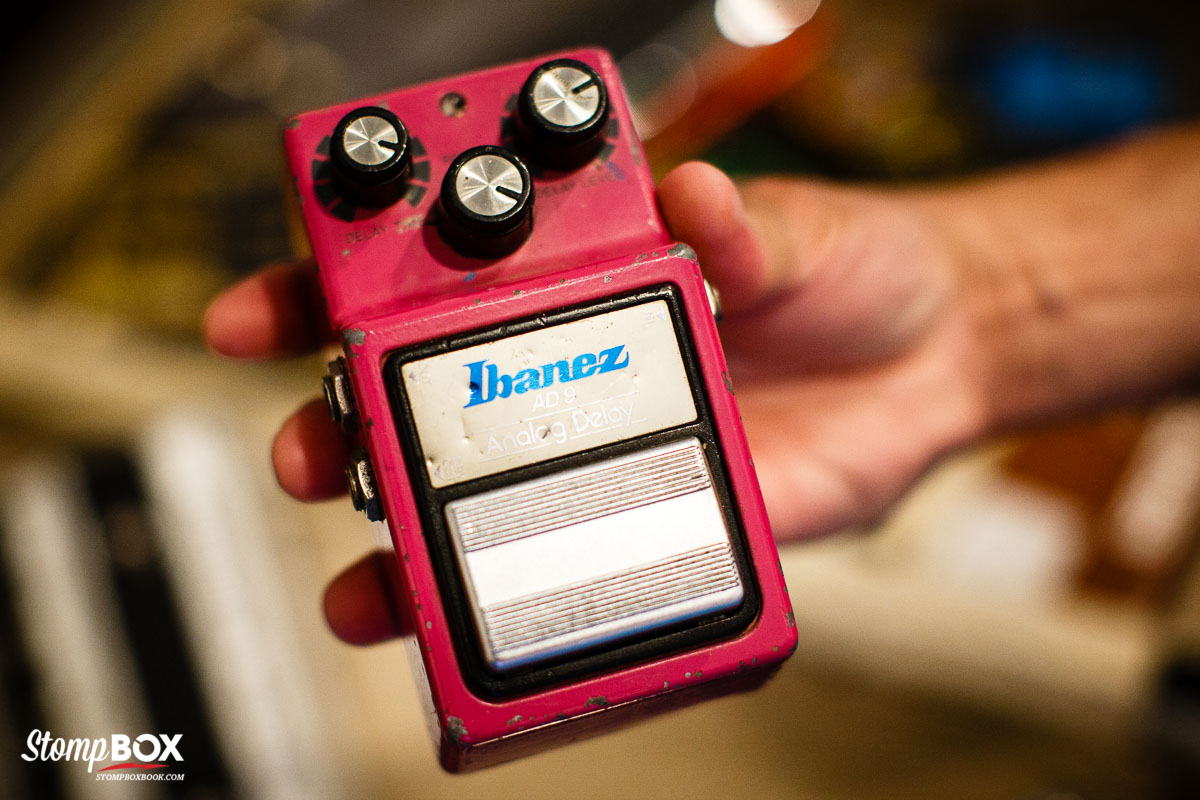 “This was actually my first effect pedal,” says Dean, who bought this classic 70s phase shifter when he was just seventeen or eighteen, in part because he could get use it to achieve David Gilmour-esque sounds. “I don’t know if he used a Small Stone,” he says, “but Gilmour used a phase shifter a lot on Dark Side of the Moon. It creates this cool, atmospheric sort of thing.” Dean also loves how the pedal emulates a rotating speaker. “Depending on the speed and intensity settings, you can back it off to have a really slow, and really ethereal sound; and if you speed it up, you can almost make it sound like a Leslie.” 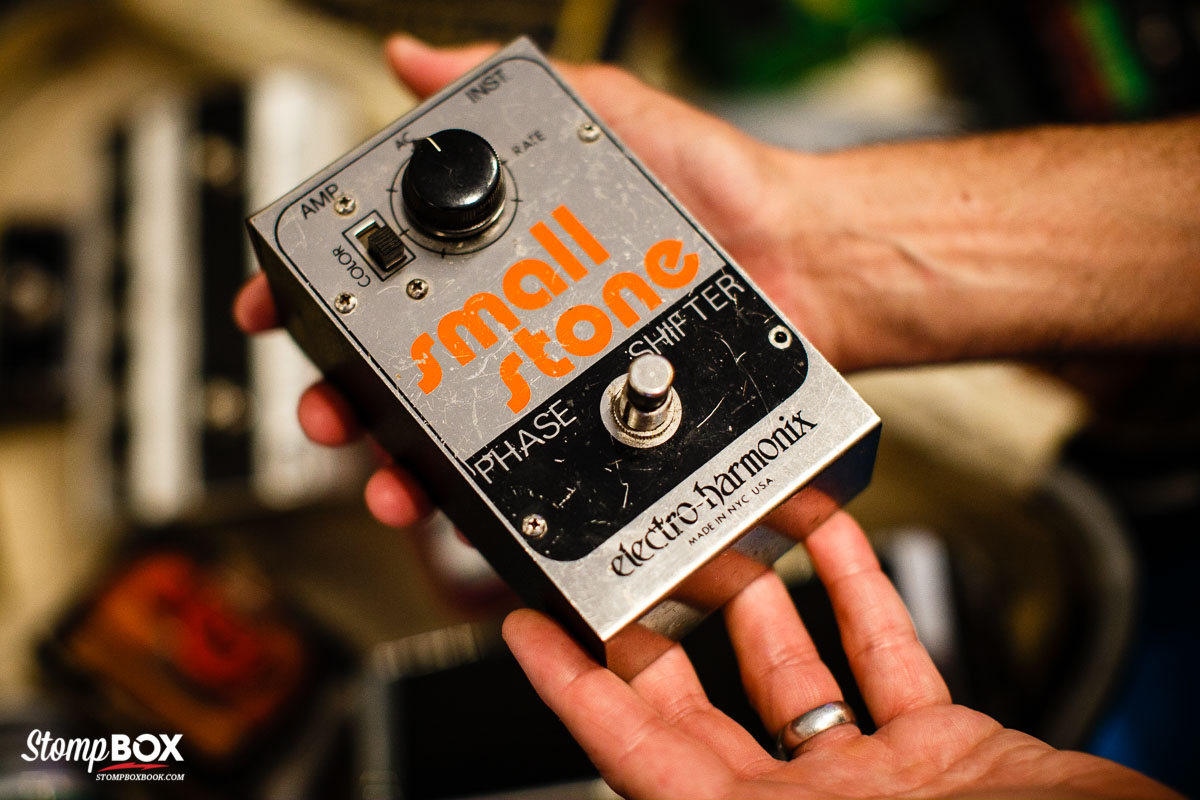 One of E-H’s quirkier 1970s offerings, this envelope follower appeals to Dean “because it’s a very select sound. Depending on how you have it set, it sounds like an automatic wah.” That auto-wah effect can be heard loud and clear on the rhythm track of “Church on Tuesday,” from STP’s 1999 album No. 4. “I used it on the chording to get this real tight automatic wah kind of sound, and it reacts on the attack of the guitar; when you come down on the strings, that opens up the envelope to give it a real ‘womp womp’ kind of sound. I had the envelope set very, very tight, so it opens and closes really quickly.” 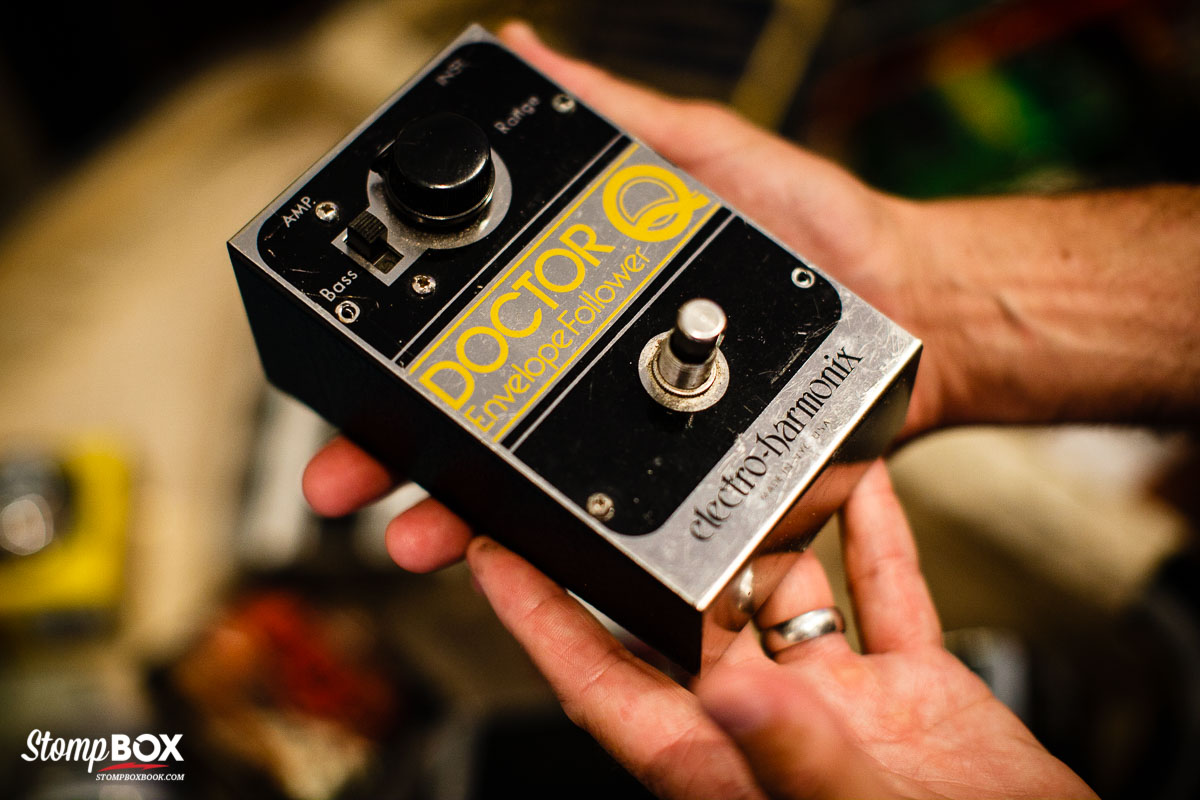 Some of the biggest guitar tones ever recorded have come from small amps — just ask Steve Cropper, Eric Clapton or Jimmy Page — but Dean enjoys taking the concept to the extreme. He used this Cactus Can miniature amplifier on several tracks from High Rise, the 2013 EP that STP recorded with Linkin Park singer Chester Bennington. “Our sound guy at the time gave it to me,” he explains. “That amp is a real go-to for me; it’s a great little thing for overdubs and things like that. All the intro guitar on ‘Cry Cry’  is with the Cactus amp, and the solo on ‘Black Heart’ is with that can, too. I also used the Can on ‘Hazy Daze,’ from our self-titled album, the last one we did with Scott [Weiland]. 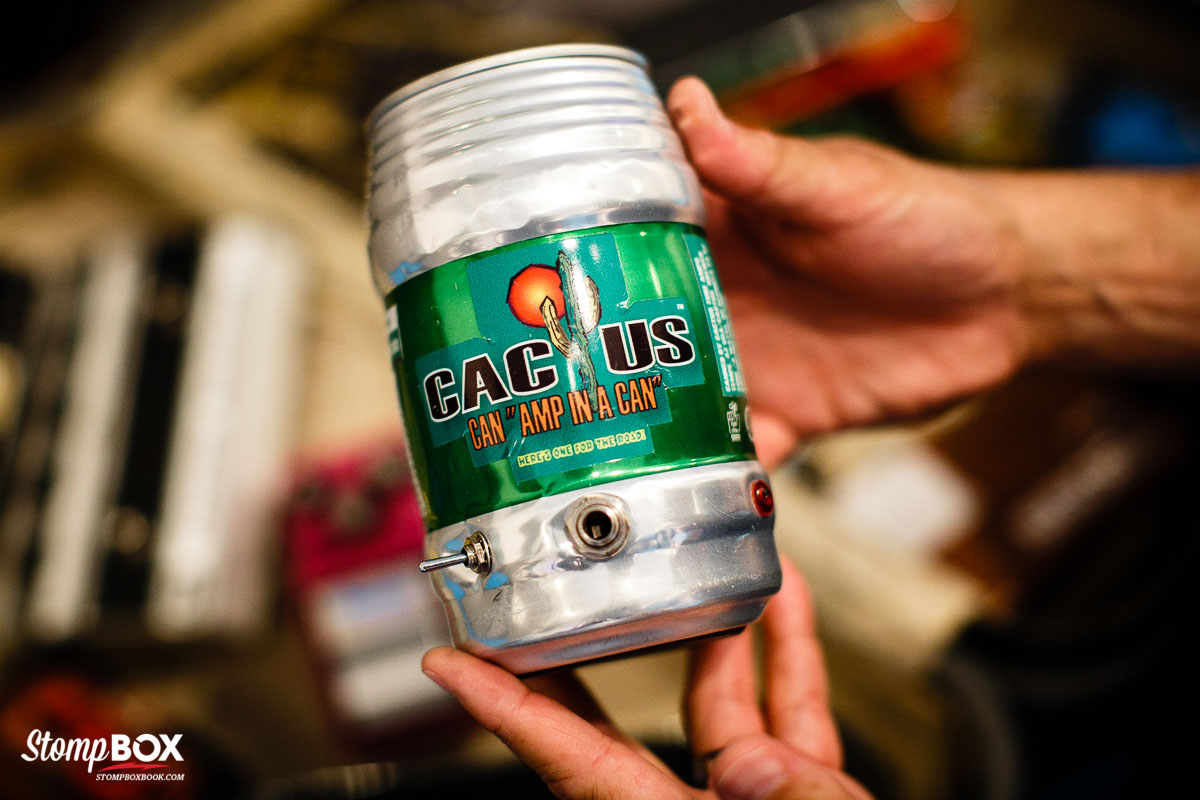 Unsurprisingly, Dean turns out to have quite the collection of lo-fi mini amps made from everyday items. “There’s a company that makes little amps like that in cigarette boxes; I have a few of those, as well,” he says. “They track beautifully. For me, they’re really essential in the studio for that quirky kind of tone, you know?” This particular mini amp, a twin-speaker model fashioned from a 16-ounce can of Old Bay seasoning, also made an appearance on High Rise. “I used on ‘Out of Time’ for the rhythm guitars on the riff part, and the intros and the choruses, too.” 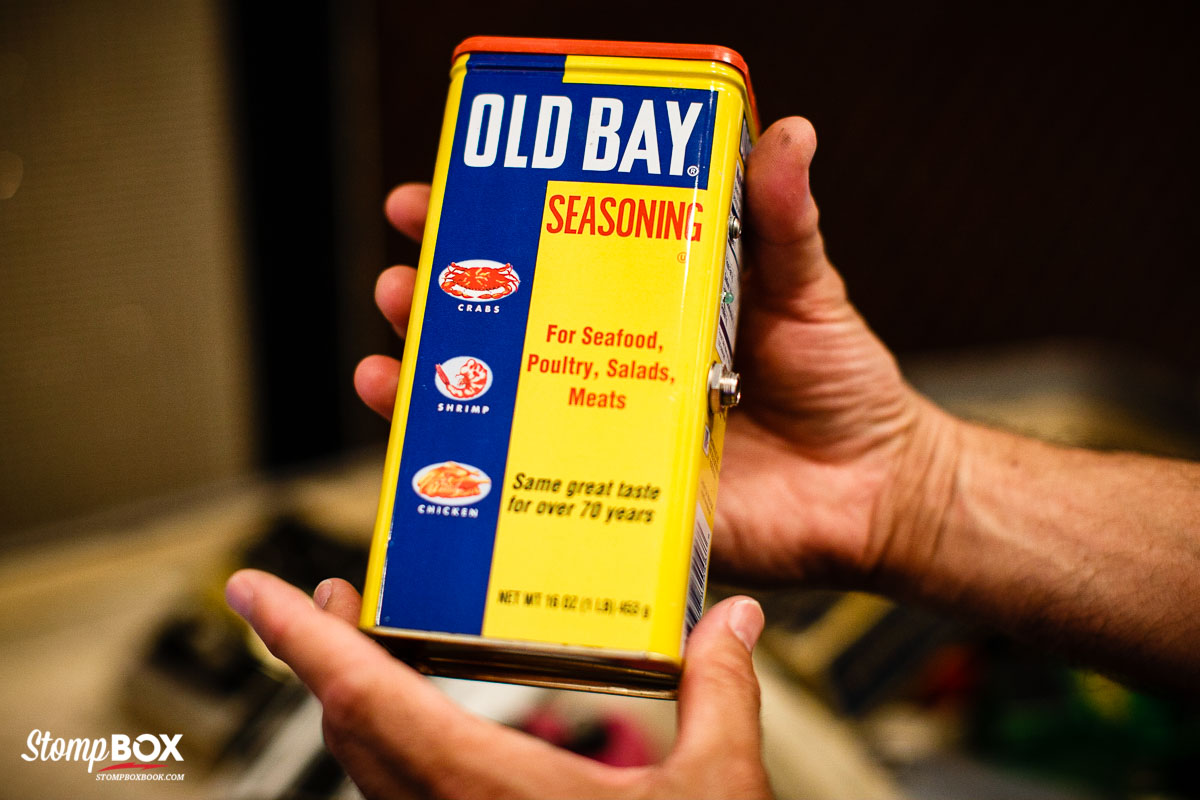 Despite its intriguing name, the Ballsack Stimulator isn’t exactly an effects pedal, per se, but rather a signal booster. “That pedal allows me to run a longer cable without losing signal,” Dean explains. “That was made by a friend of mine, a guy named Rick Hamel; he has a little company called SIB — and it stands for Shit I Built. [laughs] Rick is an incredible luthier; he builds beautiful guitars, and he makes great pedals. He also built another pedal that I use in my live rig, called a Varidrive. I keep out on my board, and it’s like having an extra amp at my feet. The Varidrive has a 12AX7 tube in it, and it has bass, mid, treble, drive and volume controls. I usually run the Varidrive into my Vox AC30, so I can kick that pedal on with my feet and really blow up the AC30.” 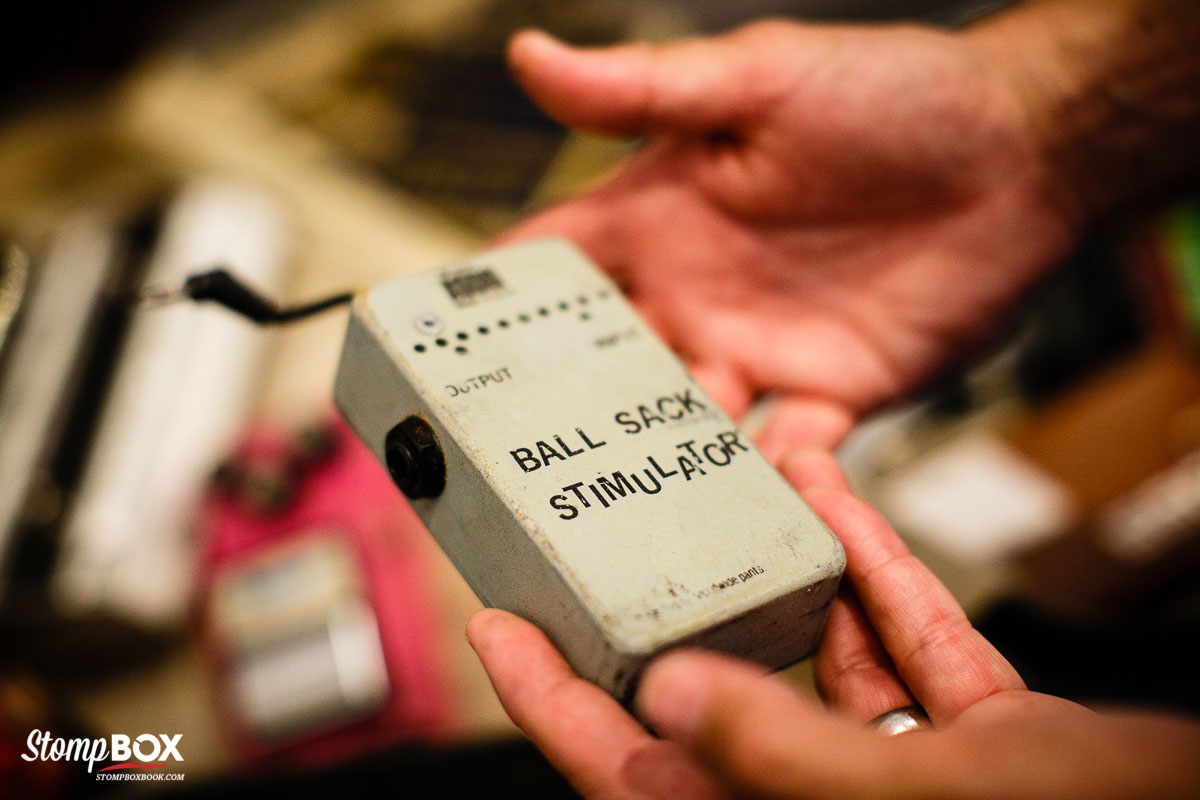 Another humorously-named stompbox from Rick Hamel’s workbench, the Buttface was SIB’s late-90s take on the classic silicon Fuzz Face. “The Buttface has that Hendrix kind of vibe — it’s kind of that real ratty distortion. You can hear a real fuzz guitar in the choruses of ‘Dare If You Dare’ from our self-titled album, the last album we did with Scott. It’s kind of a one-line part, and I used the Buttface on that.” 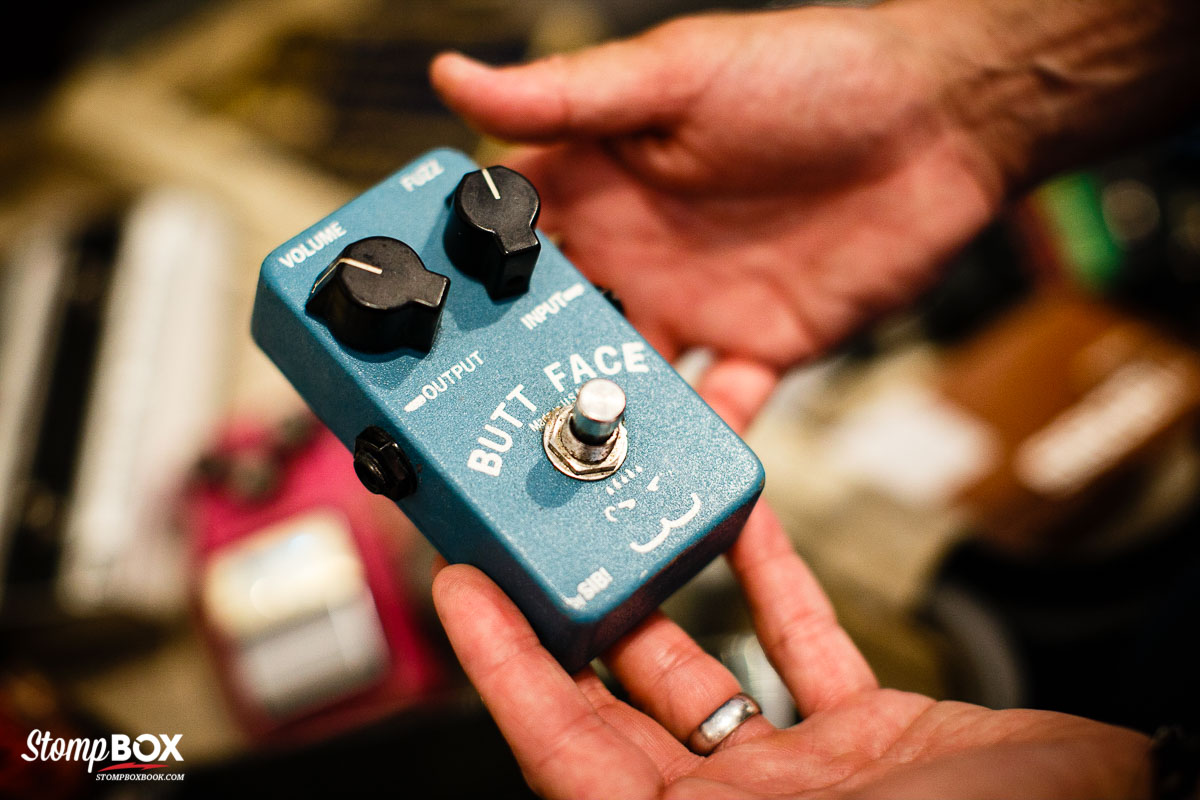 And speaking of Jimi Hendrix, Dean’s Roger Mayer Octavia fuzz is another favorite. “That’s the ultimate Hendrix pedal right there, The Octavia” he says. “I used it on a very light setting on the solo on ‘Dare If you Dare.’” 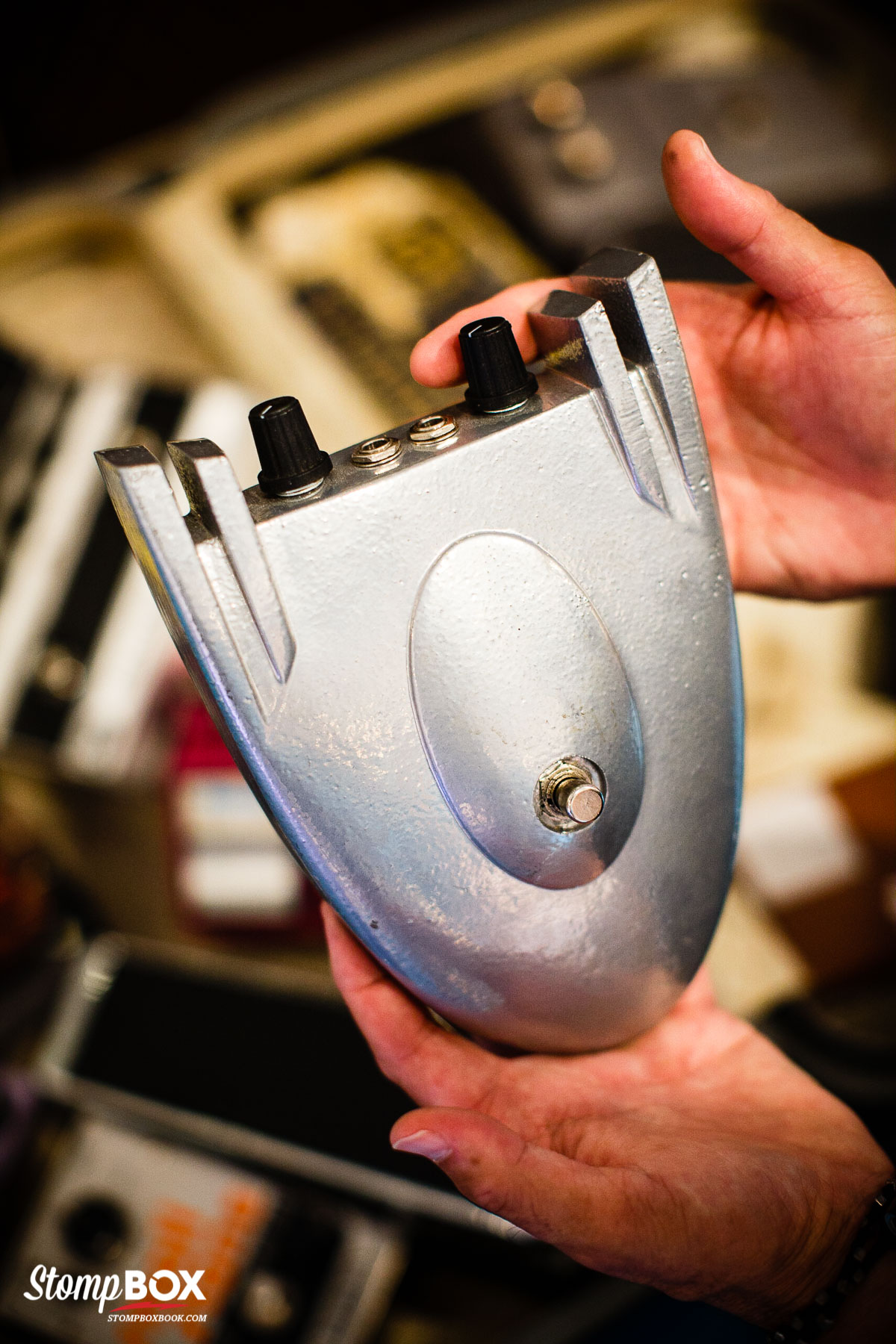 One of Dean’s most prized pedals, the Marshall Supa Fuzz was a popular fuzz pedal in the late 60s — Pete Townshend, Jeff Beck, Ron Asheton of the Stooges, and Justin Hayward of the Moody Blues were among the guitarists who used them — but they’re not easy to come by these days. “That’s the granddaddy of all pedals,” says Dean, who picked his up while on the road with STP in the early 90s. “There wasn’t many made, and they’re very rare, especially that one there with the script logo on it. I used that pedal a lot on the last record we did with Scott, the self-titled record with Stone Temple Pilots. I know I used it on ‘Dare If You Dare’ and ‘Hazy Daze’.” 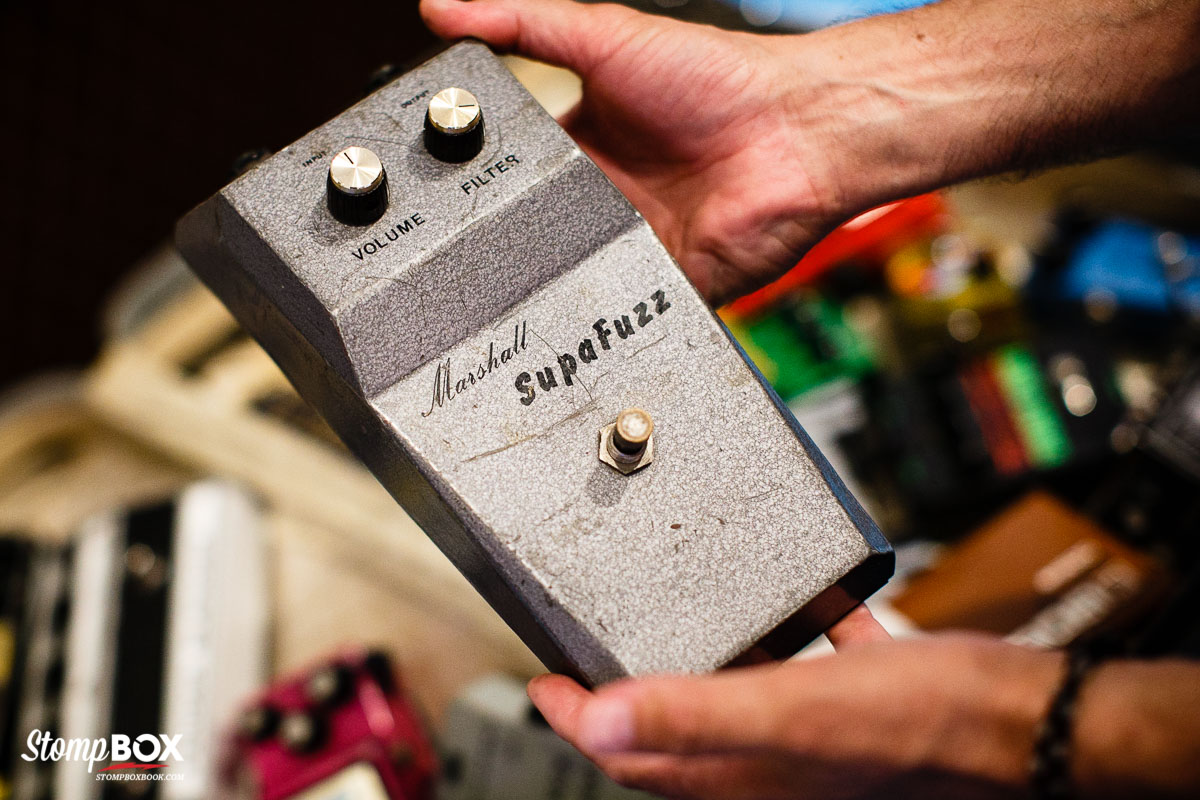 One of the four pedals introduced in 1974 as part of MXR’s original product line, the Blue Box has long been lauded for its fat octave fuzz — and Dean is definitely a fan. “That’s the quintessential script-logo Blue Box,” he says, holding the pedal up for the camera. “That’s the pedal you’ll hear on Jeff Beck’s Wired . I can’t say enough about Jeff, you know? That guy surely knows his way around a Stratocaster. He’s a huge, huge influence on me.” You can also hear the Blue Box — and perhaps Beck’s influence, as well — on “Regeneration” from 2001’s Shangri-LA DEE DA. 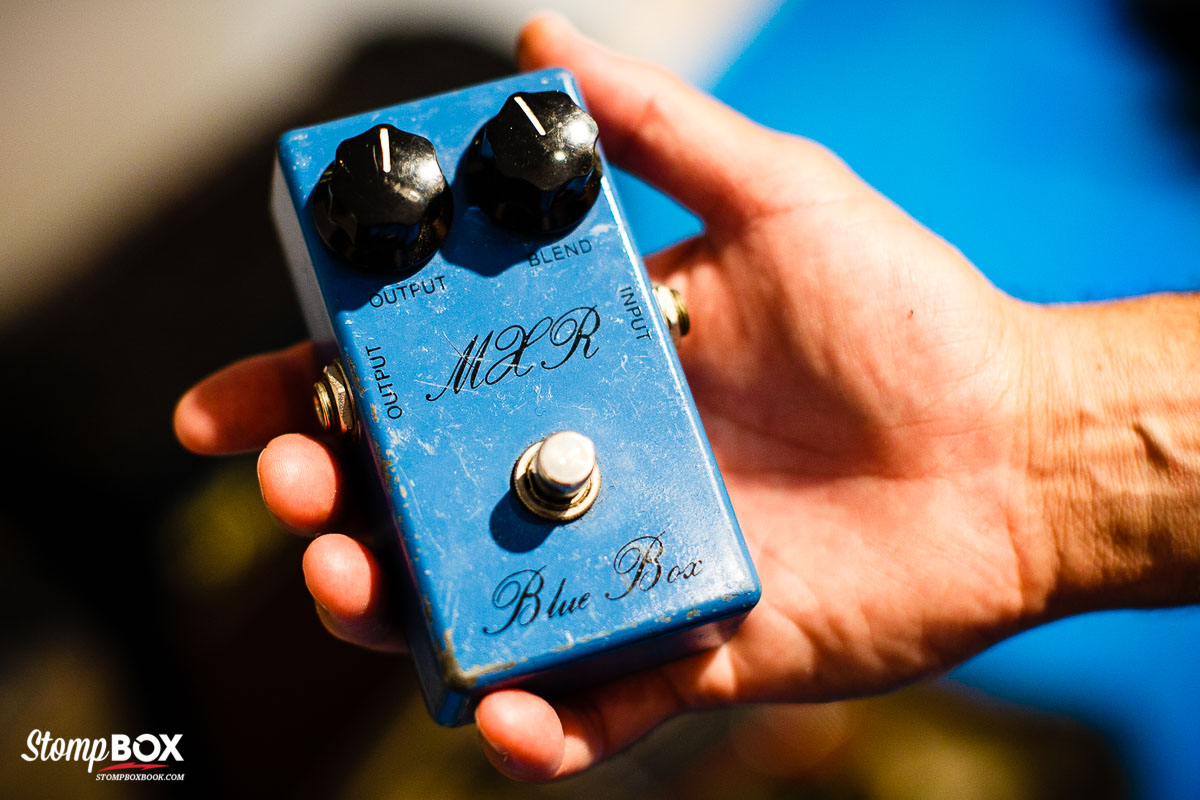 […] in this month’s awesome blog offerings, Eilon Paz’s unique audience with our dear friend Dean DeLeo of Stone Temple Pilots, “Behind the Counter” interviews with the coolest music store dudes from […]