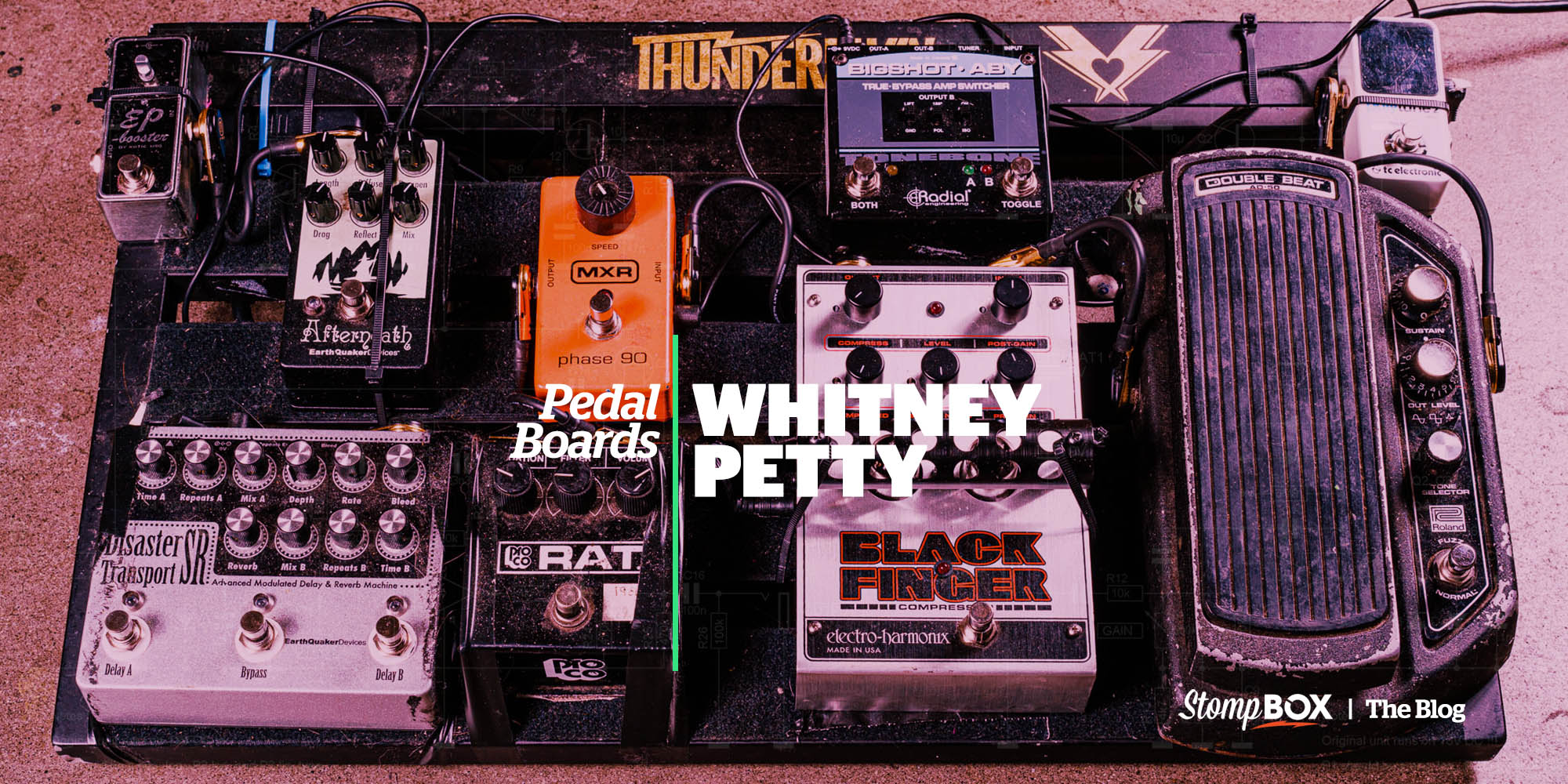 According to Whitney Petty, “The pedals on my board evoke different moods.” And clearly from examining said pedal board in an exclusive shoot for Stompbox, the Thunderpussy guitarist is a woman of many moods. Indeed, Petty is one of the most exciting, innovative new six-string stylists working today – and as such, her pedal board splits the difference between trustworthy tones ready for the stage and the intergalactic “out” sounds that inspire her to wander into uncharted zones.

Petty claims three pedals will never leave her board. Numero uno is her (not so) trusty Electro-Harmonix Black Finger – an old-school tube compressor in pedal form (well, in a housing the size of Ohio). “I don’t think there’s a song where it isn’t used,” notes Petty “The Black Finger is my favorite pedal. From the angle of which pedal breaks would make me the most bummed, it’s that one. I just love it.”

And it does break. “It’s very sensitive, and it’s got a finicky design,” Petty continues. “The power supply isn’t a standard 9 volt, and it can blow up, and there’s all these little pieces that can fall off, and the tubes are right there, so we have to bring a backup. Still, despite the struggle, it’s amazing – and the tubes hanging out are pretty sweet!”

The Black Finger the only compressor pedal on Petty’s board – not that she entirely uses it for that purpose, or even understands how it works, exactly. Vibe rules: for her, the proof is in the tone pudding. “I don’t know what a compressor is or does, but it’s fantastic,” Petty explains. “It’s a tone-building pedal. I use it basically as my number-one distorted boost. Whenever it’s time to solo, I click on the Black Finger, or sometimes I just leave it on all the time. It’s really nice when it’s a little overdriven, yet it doesn’t affect tone at all – it just adds an extra sparkle. I use it constantly.”

“That pedal just makes you want to write songs…It makes everything sound like the beginning of ‘Shine on You Crazy Diamond’ – that trippy, indulgent ‘80s Pink Floyd sound, which I love. The tails just build on each other: I stomp it on and am like, ‘Wow, I sound like David Gilmour!’”

Along with tone, Petty especially enjoys the added finger/pick dynamics the Black Finger brings as the compression kicks in. “Bradford [Cox of Deerhunter] made me buy my first pedal, a Big Muff, but I needed something louder, that cut better,” Petty notes. “The problem with fuzz is the lack of definition. I don’t have that problem with the Black Finger: it doesn’t diminish string clarity, but increases it – even on chords. Because I’m handling rhythm and lead, it’s important to retain the character of what I’m doing with my hand, wrist, and fingers, so I need it – I just wish it didn’t break all the time!” 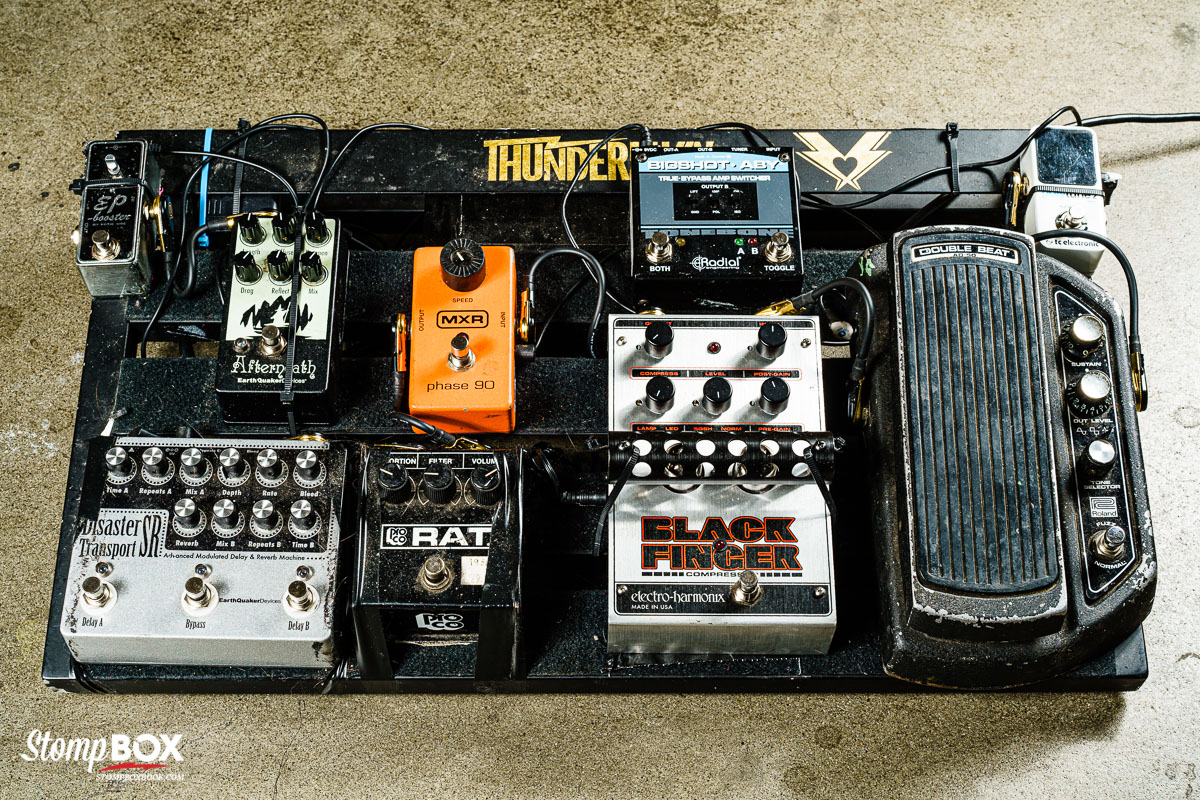 Another pedal that has permanent pride of place on Petty’s board is the Earthquaker Afterneath. Unlike the Black Finger, it’s not a pedal Petty just leaves on all the time, but when she does use it, the magic comes out profusely. She’d never used a reverb pedal before, and the Afterneath’s unique setup – it’s basically a reverb that thinks it’s a delay, able to stack various reflections on top of each other – blew her mind.

“That pedal just makes you want to write songs,” she says. “It makes everything sound like the beginning of ‘Shine on You Crazy Diamond’ – that trippy, indulgent ‘80s Pink Floyd sound, which I love. The tails just build on each other: I stomp it on and am like, ‘Wow, I sound like David Gilmour!’” She discovered the Afterneath when Earthquaker sent its whole pedal line to producer Sylvia Massy for Thunderpussy to experiment with while recording its 2018 debut album. “It was fifteenth in the chain, and when I got to it, I was like, ‘Wow, I just want to play this pedal for the rest of my life.’ I recorded [the song] ‘Young and Pure’ through that, and it just made the sound for me. The choices I made with that pedal changed the whole tone and dynamic of the song. [Pearl Jam guitarist and Thunderpussy mentor] Mike McCready was like, ‘What’s that sound?’ So I gave him an Afterneath, and now he’s obsessed with it, too.”

“I dig everything Earthquaker does,” Petty continues, noting the third pedal she now can’t live without is the company’s rare Disaster Transport delay. While she was forced to use a delay in her first band, Deerhunter, she didn’t bond with it like the Disaster Transport.

“I’d never had a delay before,” Petty says. “The Disaster Transport is just more interesting than other ones I’ve messed with. It’s just fun to kick on. I use it for our cover of ‘Somebody to Love’: it’s so cool to do a trippy solo with! I bend the notes as they’re delayed by the pedal; no matter how far out of tune it goes, it always comes back. Blending the different channels is really weird; the reflections start zipping around your head like, ‘What the fuck?’ I start twisting the knobs, and it just starts feeding back into itself into outer space! It’s just really weird – and so cool!”

The distortion/fuzz and modulation choices, meanwhile, rotate out a bit depending on her needs. Petty has a classic Rat here, but she’s also been experimenting with Joe Gore’s fuzz pedals for some recent film score work. “This is a Rat from ‘86,” she explains. “I did a little research on which Rat to get, and apparently this has the chip. It’s $200 more for the chip, but I need the street cred of the old one. It’s really cool – I’m still trying to figure out what to do with it. My favorite sound with the Rat so far is to switch to the warm pickup and then just crank it. It’s so shrill and startling, it sounds like a chainsaw! I also use it as a boost to get feedback. The Phase 90, meanwhile, I use to get a little movement – but sometimes it can get to be a little much. That’s another one I’m still working out the right sound for.”

Lastly is another pretty damn extreme choice, Petty’s beloved and rare Roland Double Beat Wah AD-50, which does double duty on fuzz and wah filtering. “I always wanted a wah,” Petty explains. “Some of my fave guitarists like Joe Walsh and Joe Perry killed it with those kinds of expression pedals. It’s exciting to do live, and not a lot of female players really utilize that vocal sound on the guitar.”

Full interview and photo of Whitney’s chosen pedal will be featured in the Stompbox Book, coming summer 2020. 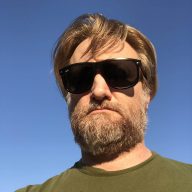