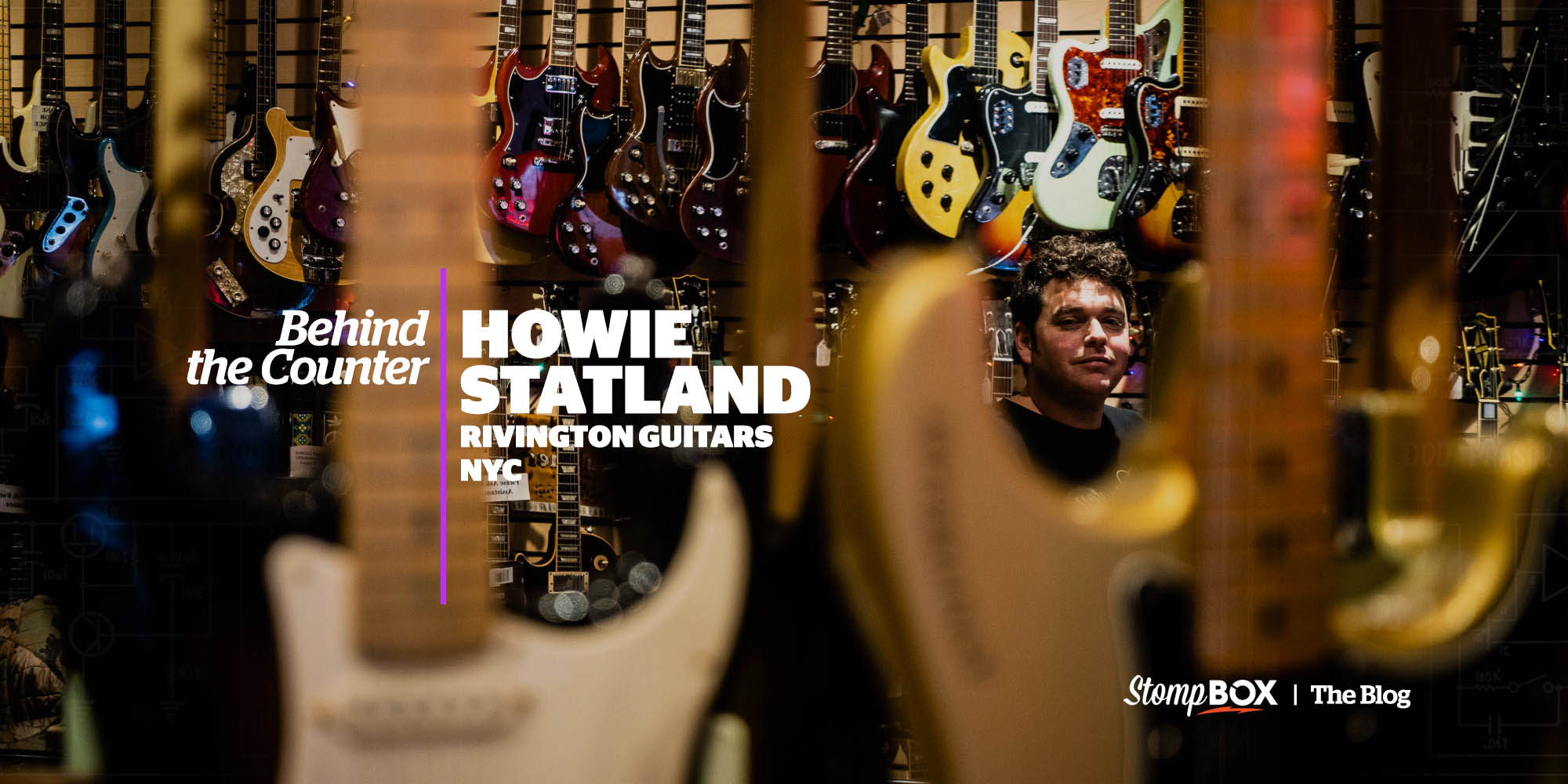 How did you get to open the store?

I was in bands. Thin Lizard Dawn (RCA) and NYCSmoke that played all around the country and I started buying and selling while I was touring around. My band broke up in ’99 and I began selling out of our original store on Rivington Street on the Lower East Side.  It started out as a way to make money to support my playing in bands.

Who are the other dudes behind the counter?

Geoff Bennington, Alex Russo, Sam Phelps, Adrian Carter and Neal Winkowski is our repairman.  Everyone who works here is a professional musician as well and they all have bands…so they can relate to our customers.

Circa 1971 Univox Super FUZZ.  – My wife bought it for me and it has a sticker on the back that says Handle with Love

People always are asking for Reverb…and Delay… People are always looking for an original KLON Centaur. These are tough to find but worth it for the money when you find them. The Klonis the most transparent and warm sounding overdrive around. Nothing sounds like it. Lots of players swear by it and it’s their most treasured overdrive. It sounds just incredible.

Robert Plant! He hung for hours talking Zep…the early years and how they used the Rickenbacker cabinets that Rickenbacker gifted them but threw out the heads and used Marshall heads….I plugged in and played the solo to Whole Lotta Love, he pulled the plug on me and said – STAIRWAY DENIED!

Earthquaker Devices…..all their pedals are great but they are not so under the radar any more.   We knew them when they were just starting out it’s been so great to watch them grow as a company.   They do things right.

Robert Plant! He hung for hours talking Zep…the early years and how they used the Rickenbacker cabinets that Rickenbacker gifted them but threw out the heads and used Marshall heads….I plugged in and played the solo to Whole Lotta Love, he pulled the plug on me and said – STAIRWAY DENIED!   – I kid you not, he’s a great guy!

Also Angus Young….he came in to look at our SG’s. When he sat down to play you knew it was him from the first note.  Another great guy.

One time, Lou Reed had me come to his soundcheck to check out his rig and pedals.   That was probably the coolest…he had a Tone King amp, the Kelly guitar from Carmine Street, and a Pete Cornish pedal rig that was just out of this world.   He let me play his guitar and pedals throughout his sound check so I could check them out. That was special for me.

Tell us a favorite urban legend.

48th Street in its heyday – Pete Townshend picking out several SG Specials at Manny’s ….we hear lots of stories about 48th Street and the guitar dreams of many… 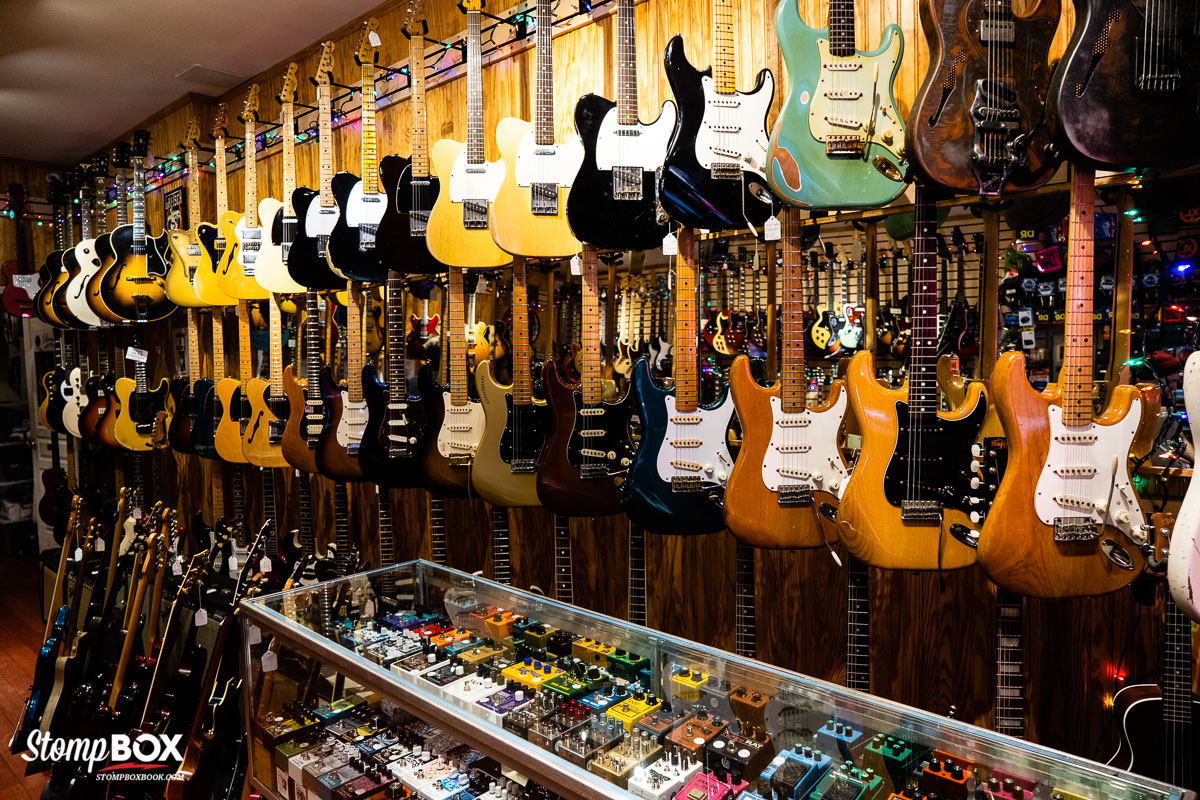 An original Ibanez TS-808. I believe it’s the best sounding distortion and it may be all you need.

Blackbird and Over the Hills and Far Away.

The NO List: Stairway to Heaven, Over the Hills and Far Away, Blackbird, and believe it or not, singing in general just makes everything awkward in a guitar store setting.

Whose pedal would you like to see in Stompbox book?

Describe an imaginary perfect day at the store.

Pete Townshend comes in with Roger Daltrey and John Entwistle and they reminisce about The Who…then Jimmy Page comes in with Robert Plant, they start a jam….and Plant and Daltrey are singing….Townshend and Page are showing each other riffs…Iron Maiden comes in the door and they start playing Killers…then Hallowed be thy Name….RUSH sees them in the window….Geddy Lee picks up a Rickenbacker bass and plays Cygnus X-1 showing Steve Harris how it’s played….Bob Dylan digs the scene and steps inside…Kurt Cobain sees Dylan and comes in to hang with him…and finally Jimi Hendrix comes by and puts all these guys to shame trying out a ’59 Strat we have on the wall.   All patrons go home with a guitar and amp and I go home to my wife and son and tell them the story. 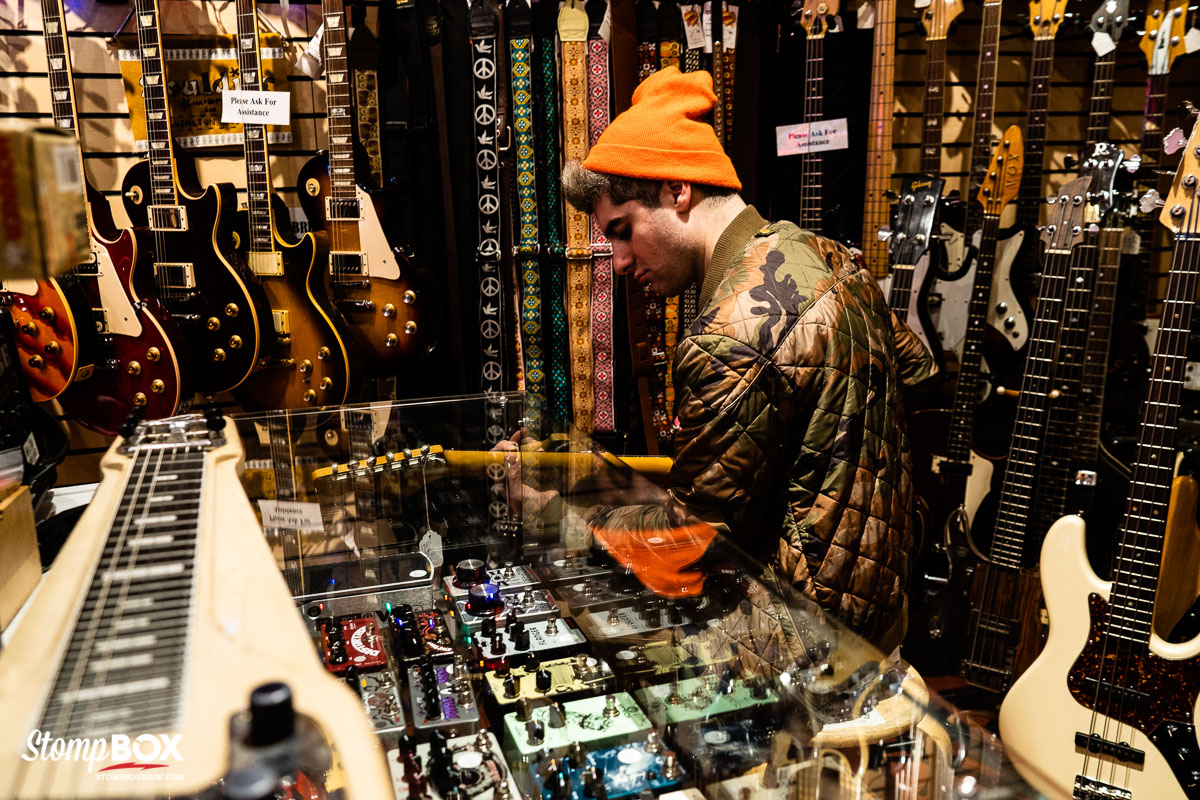 When you’re not here, where are you and what are you doing?

I like to go running, snowboarding, reading, and playing guitar and writing songs….mainly hanging with my wife and two year old son, Jude.

According to my assistant, a well known guitarist has referred to me as the “Big Tough Guy” – I don’t see it.

Show us some pedals from your secret backdoor stash.

What’s the story with this one here?

It was made for me by a customer in Japan. He made me two of them, this one and one that I sold to Win Butler of Arcade Fire. It’s a killer germanium fuzz pedal the “Kani Fuzz.”

I saw Stevie Ray Vaughan and Jeff Beck play together, I also saw Stevie the night he died in Alpine Valley.

My Mom showing me how to play piano…she’s a concert pianist and started me on my way here. 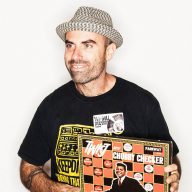