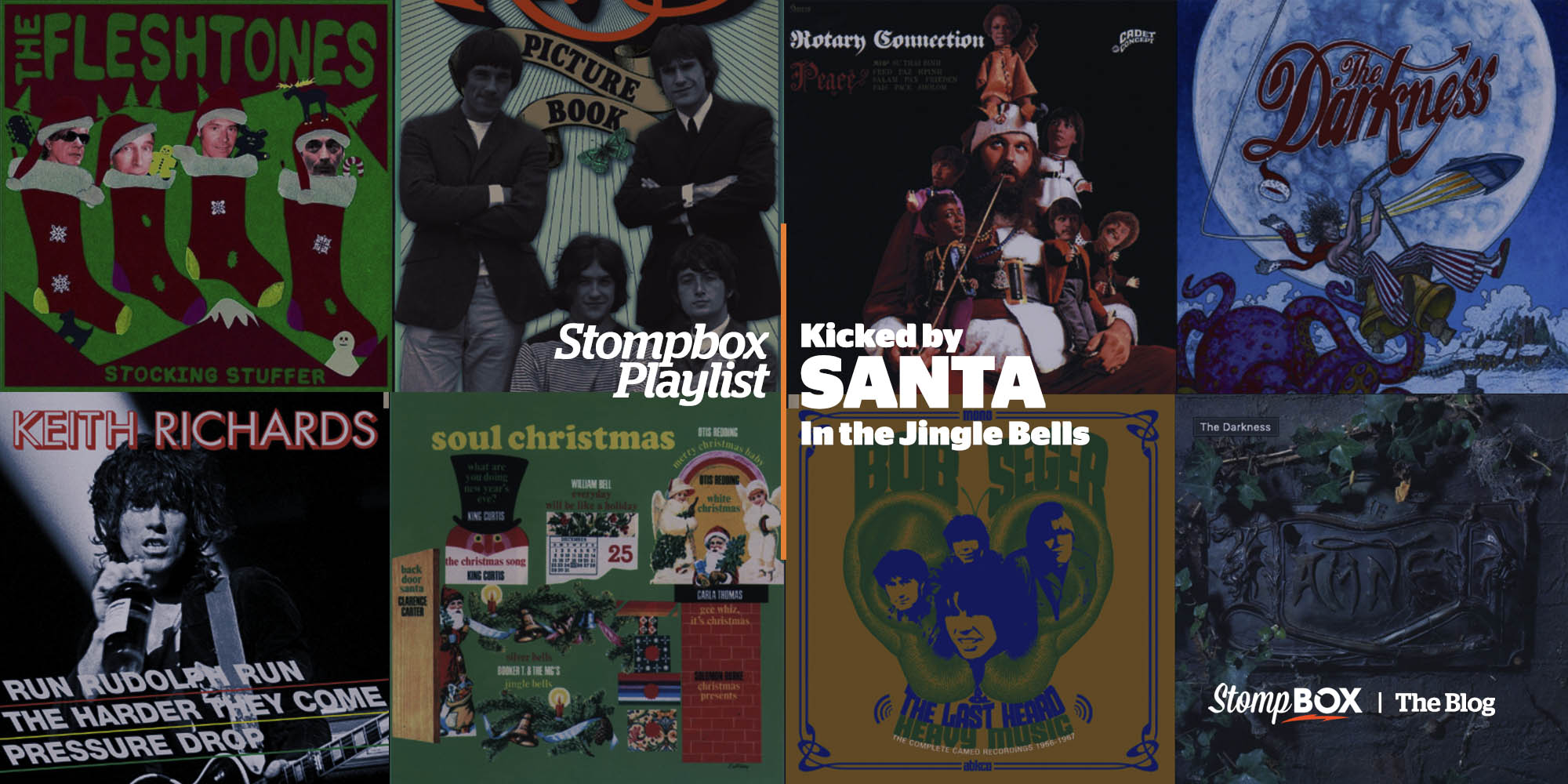 Listen, we feel your pain: ‘Tis the season to be inundated by Christmas music, and it’s gotten to the point where you can’t be in a public place for more than five minutes without being subjected to Mariah Carey’s “All I Want for Christmas is You” or some soulless skim-milk cover of Donny Hathaway’s “This Christmas”. It’s enough to put you off of Christmas music altogether, right?

Truth is, there are actually plenty of ass-kicking Christmas songs out there; it’s just that they never get any play on your local radio stations or down at the mall. In honor of the Twelve Days of Christmas, we’ve put together a playlist of a dozen high-voltage holiday jams that are short on Yuletide sentimentality, and long on attitude and big guitars. Don’t let the Christmas blues get you down — crank up these tunes and blast that elf off the damn shelf!

The Sonics — Don’t Believe in Christmas

These legendary Pacific Northwest garage rockers made their distaste for the holiday season loud and clear on this 1965 track, which rewrites (and further revs up) Chuck Berry’s “Too Much Monkey Business” to run down a whole litany of Christmas disappointments. And just to further reinforce their Scrooge-itude, they suggest that Rudolph’s red nose is the result of a drinking problem.

Speaking of Chuck Berry (and Rudolph the Red-Nosed Reindeer) — several great versions of his Christmas classic have been recorded over the years, but none of ‘em (not even Chuck’s) can touch the lurching, unwashed funkiness of Keith Richards’ 1978 rendition. This performance generates enough energy to light up an entire Christmas tree farm, even while it threatens to fall apart at any second. Keep it together, Keef; Santa will be here with your heroin real soon!

Bob Seger & The Last Heard — Sock It To Me Santa

While those of us who grew up in Michigan had the pleasure of hearing it on the radio every Christmas, far too many have been unnecessarily deprived of experiencing the raucous joys of Seger’s 1966 holiday raver. Channeling James Brown and Mitch Ryder, pre-beard Bob lays down a list of demands that includes a bike, a baseball bat and assorted toys; clearly, he’s already set for electric guitars.

Possibly the greatest double-entendre Christmas song ever recorded, Clarence Carter’s lusty 1968 single truly gives new meaning to “the spirit of giving”. It also features a young Duane Allman on guitar, lending additional raunch to the already sweaty proceedings. “They call me Back Door Santa,” sings Carter, who adds, “and I like for them to call me that.” Because, really, who doesn’t appreciate a little acknowledgement for a job well done, especially at Christmastime?

Ray Davies’ acerbic wit has rarely been sharper than on this 1977 single, wherein a gang of impoverished kids take out their Yuletide frustrations on a department store Santa. The currently-widening gap between the haves and have-nots makes the song’s social commentary feel more relevant than ever, while Dave Davies’ wailing leads and brawling riffs sound as fresh as they did when he tracked them over four decades ago.

Davie Allan & The Arrows — Angels We Have Heard On High

You probably thought you never needed to hear this cherubim-centric 19th century carol again — but then, you’ve probably never heard this ripping instrumental rendition by the King of the Fuzz Guitar himself, Davie Allan. The man behind the immortal soundtracks of such classic 1960s biker flicks as The Wild Angels and Born Losers has actually released two killer Christmas LPs in this century (2004’s Fuzz for the Holidays, from which this track hails, and 2007’s Fuzz for the Holidays 2), both of which are essential accompaniment for rebellious holiday revels.

And speaking of fuzz guitar — it’s slathered all over this track like rum on a Christmas fruitcake. Chess Records’ resident psychedelic act, The Rotary Connection recorded this as part of Peace, their underrated 1968 Christmas album, much of which sounds like Sly & The Family Stone curb-stomping Santa’s elves. The fuzz in question could have been the work of RC guitarist Bobby Simms, though it also sounds kind of like the work of legendary Chicago session man Phil Upchurch, who was known to play on many of their recordings.

Any song that features the line “I got a fuzz box in my stocking!” deserves to be part of a Stompbox Christmas playlist, but this hard-pounding Fleshtones track would be a worthy addition even without it. “Super Rock Santa” hails from the NYC garage greats’ booze-fueled 2008 album Stocking Stuffer, which has the power to turn even the most staid of office holiday parties into a Human Resources nightmare.

The Raiders’ 1967 holiday LP, A Christmas Present… and Past, was too downbeat and satirical for most of their fans at the time, but it’s come up for some well-deserved reappraisal in recent years. A salute to grumpy postal workers everywhere, “Rain, Sleet or Snow” features some killer fuzz guitar from Freddy Weller, which is offset nicely by some seriously psychedelic strings.

The Damned — There Ain’t No Sanity Clause

A Christmas song that mentions rabies, Dracula and Jaws, and takes its title from a Marx Brothers joke? Sounds like the work of British punk legends The Damned — and indeed, it’s Captain Sensible and the lads giving St. Nick the two-fingered salute he deserves on this 1980 classic.

King Diamond — No Presents for Christmas

No hard-rocking Christmas playlist is complete without this speed metal salute to a holiday gone very, very wrong. Danish metal legend King Diamond namechecks cartoon characters Donald Duck and Tom and Jerry make appearances in the lyrics, which makes absolutely no sense yet is somehow absurdly perfect, and Andy LaRocque’s blazing fretwork makes a nice consolation prize for anyone whose stocking didn’t get filled.

Sure, The Darkness’ entry into the 2003 British Christmas single sweepstakes features sleigh bells and even a children’s choir, but don’t let that fool you — this is no stodgy holiday hit. Justin Hawkins’ falsetto lead vocals are hilariously over the top, while the phrases “ring in peace” and “bells end” are really just cover for working the rude British terms “ringpiece” and “bellend” into a Christmas song. Throw in some thunderous production from the great Bob Ezrin, and glorious twin-guitar harmonizing from Justin and his brother Dan, and you’ve basically got the greatest Christmas song of the 21st century.

Though best remembered for his fabulously filthy Dolemite raps, the late, great Rudy Ray Moore could also belt out a tune — especially if there was a way of working the topic of sex into the song. By updating this old Charles Brown blues with an invitation to “do it,” Rudy gave us the perfect closing track for our playlist. Merry Christmas to all, and to all a nasty night!

May I respectfully suggest “Santa Claus wants some lovin’” by Albert King.

Eilon
– In reply to: josh hrehovcik

Thanks Josh!
Will definitely include this fine selection on next year’s playlist 🙂

[…] Eilon’s amazing piece last month on Eric Johnson—or Dan Epstein’s hysterical Kicked by Santa in the Jingle Bells playlist, or our latest in-depth Stompbox Makers interviews and Behind the Counter profiles, this […]