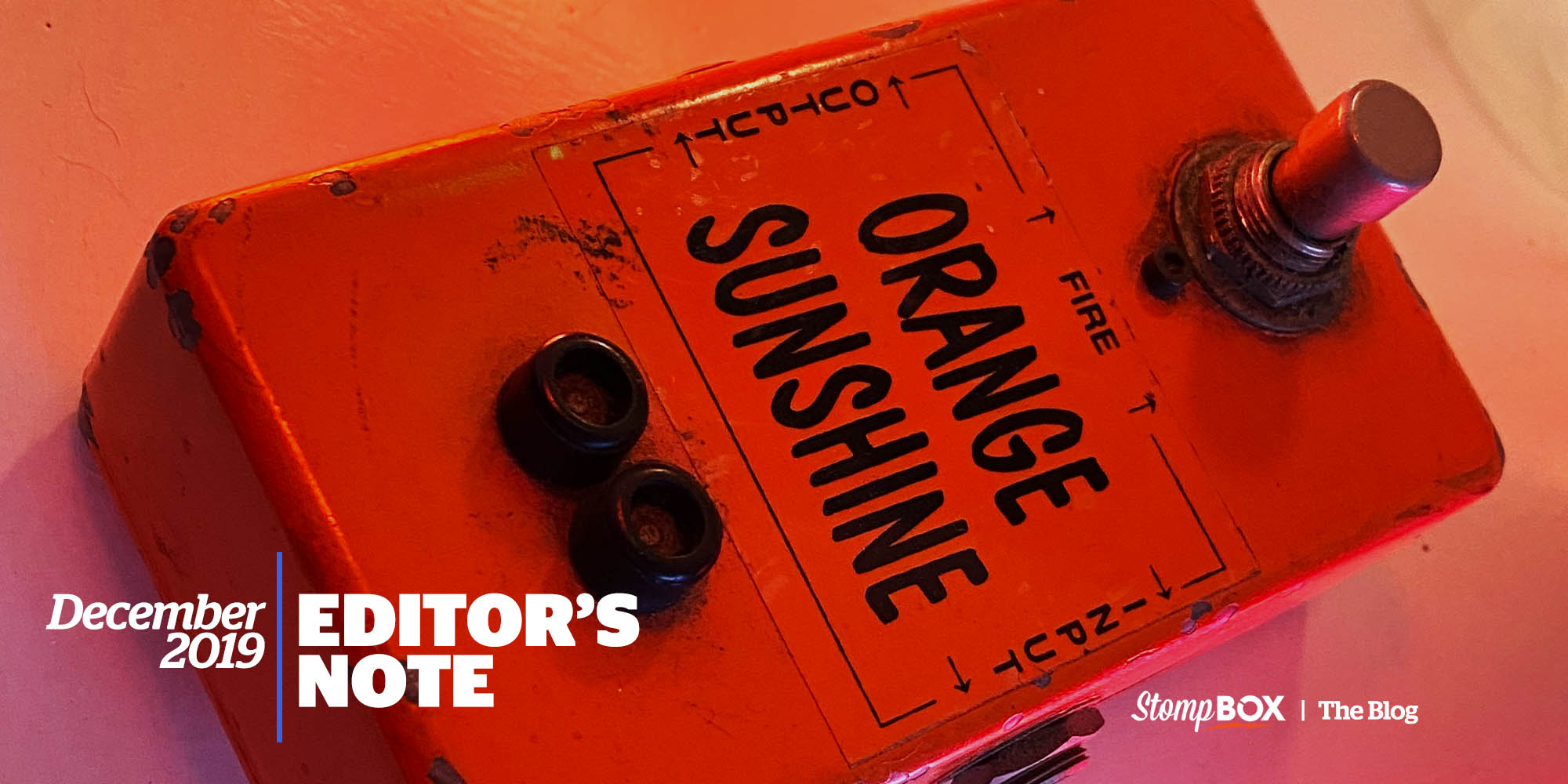 The holiday season always conjures up nostalgic feelings and memories, which may be why I suddenly decided to dig my White Sands Orange Sunshine pedal out of storage on a day when I should have been unpacking our Christmas decorations.

Purchased in December 1993 as a Christmas present to myself, the Orange Sunshine was the very first “boutique” pedal I ever owned, as well the very first true fuzz box I’d ever plugged into. Unfortunately, as I knew little back then about the inner workings of such things, I didn’t really understand how to use this pedal to its fullest, er, effect. I expected that merely stomping on it would unleash a torrent of hairy, snarling, speaker-melting fuzz; but as its circuit was (as I know now) essentially based on that of a Vox 816 Distortion Booster, the fuzz it produced was much smoother and creamier than what I thought a fuzz should sound like. Even more disappointing to me was the fact that my overall volume actually lowered whenever I kicked it on in a live setting. It’s a problem that could have easily been resolved by putting an overdrive or EQ pedal before (or after) it on my pedal board, but helpful information about such things was much harder to come by in those early Internet days…

So after just a few frustrating gigs, it was sundown on the Orange Sunshine. But a few months later, while recording some bong-tacular doom riffs on my home 4-track, I plugged my bass into it on a whim — and the beautifully nasty tone produced by that combo would have made Geezer Butler nod with dark approval. Those riff tapes have sadly been lost to the ages, but the Orange Sunshine is still with me; it may not have turned out to be the fuzz pedal of my dreams, and it’s not even remotely versatile (the utter lack of controls should have been my tip-off there, right?), but its sound, look and overall vibe simply made it too cool to part with.

And that’s the way it goes, here in the strange and enchanting world of effects pedals: It can often take some time, experience, experimentation, and guidance to figure out which effects pedals are right for you — and even if a pedal isn’t perfect for your immediate purposes, it can still surprise you. Just ask the brilliant guitarist, composer, improviser and producer David Torn, who generously invited Stompbox generalissimo and photographer Eilon Paz and SB contributor Chris Buono up to his Woodstock studio, where he proceeded to unveil the highlights of his pedal collection. For Torn, amassing a crazy amount of equally crazy pedals isn’t about searching for perfection, or collecting for collecting’s sake. Rather, it’s about that joyful moment of inspiration that can occur when a pedal suddenly turns your guitar sound (and your brain) upside-down.

We’ve been hearing similar stories over the past two months from an impressive array of players. (Hey, sorry that I forgot to write an Editor’s Note for November — we’ve been really busy!) Our intrepid contributors (including the great Mike Molenda, and our newest teammate Whitney Petty of Thunderpussy, who writes as good as she rocks), have landed interviews with such esteemed guitarists as Jennifer Batten, High On Fire’s Matt Pike, Joey Santiago of the Pixies, Mike McCready of Pearl Jam, John Dwyer of Thee Oh Sees, Daniel Ash of Bauhaus/Love and Rockets, and filmmaker/composer Jim Jarmusch, all of whom have fascinating pedal tales to tell. Eilon has been taking photographs on both sides of the Atlantic, including a visit with Mick Ronson collector Rick Tedesco at The Guitar Hangar in Brookfield, Connecticut, and a truly mind-blowing session at London’s legendary Macaris, where Ant Macari opened up the shop vaults to share some truly rare and wondrous pedals with us.

As we sprint towards the publication finish line, we’re also most pleased to announce that we’ve added Josh Scott of JHS Pedals to the Stompbox team. A true aficionado of pedal aesthetics, Josh has truly gone down the pedal history rabbit hole while writing a chapter for our forthcoming book on the art and design of guitar effects. Though you won’t be able to read the whole thing until this summer, we will be excerpting some of his fine work here on the Stompbox blog in the coming months.

Oh, and speaking of rabbit holes: While I can’t reveal too much about it just yet, we’ve had such an awesome time, learned so much, seen so much cool stuff, and met so many wonderful people while putting the Stompbox book together, we’ve come to the conclusion that one book simply won’t be enough. Watch this space for an official announcement coming soon — or follow us on Facebook, Instagram and/or Twitter, where all shall also be revealed.

And finally, whatever pedals or gods you may worship, we here at Stompbox would like to wish you and your loved ones the most joyous and peaceful of winter holidays — though if you feel compelled to disturb the peace by stomping on your favorite fuzz, we certainly won’t complain. 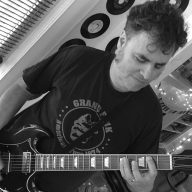