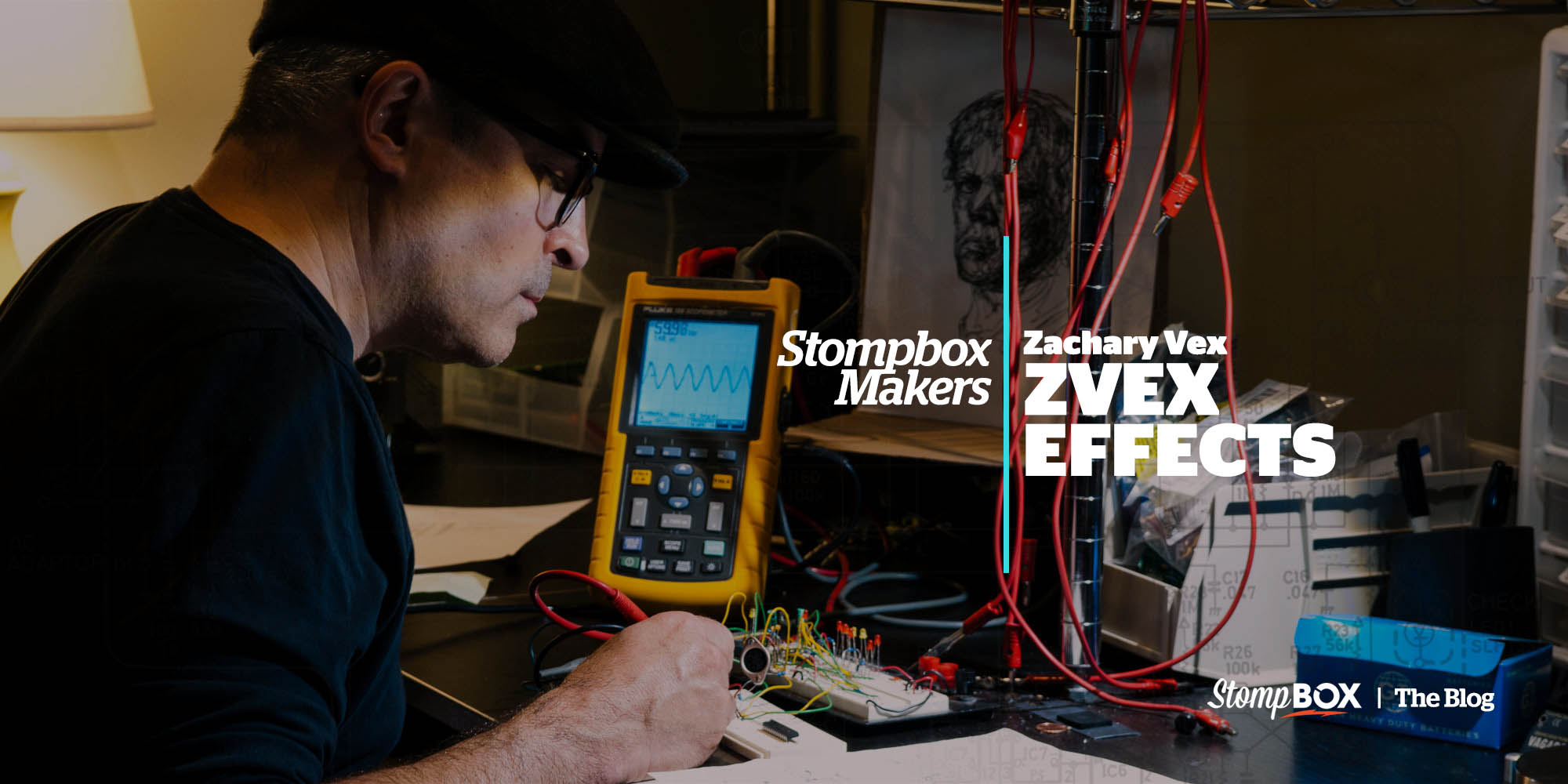 For our third “Stompbox Makers” post, we talk to Zachary Vex, the founder of Z.Vex Effects who has been described as “the mad scientist” of guitar pedals. Founded in the mid-1990s, the Minneapolis-based company’s customers include Jack White, Billy Gibbons, Billy Corgan and John Frusciante. The Fuzz Factory is the company’s most well-known effect, described by Guitar World as “a Fuzz Face that’s OD’d on a cocktail of speed and LSD.”

Today, we focus on the Z.Vex Lo-Fi Loop Junky. It’s got a 20-second analog phrase-sampling looper that “makes your guitar sound like an ancient radio transmission, but your direct guitar sounds especially sparkly.”

How do you make an effect that sounds different from everything else?

“I choose components that other people haven’t used. I use devices that don’t sound like what everybody else is using to create different texture. I try to do that as much as I can.

“For the Loop Junky, which took me years to design because I gave up on it so many times – I think it took me three years to finish – it uses a chip designed for something that was called a voicecorder. It was used for children’s toys and note-taking and for gravesites.”

“People could record a message – ‘Welcome to my grave’ maybe [laughs] – before they died. And they were guaranteed that the message would last for over 100 years, even if the batteries went dead. You put fresh batteries in after waiting a 100 years, and it would come right back to life.

“This chip is very, very strange. It’s designed to record the human voice, but you can make it record guitar and force it to immediately play back in a loop again and again and again. It took me a while to trick the chip into doing this because it was designed to only play at the press of a button. But that chip has a character a sound to it – it has a built-in brick wall compressor, it has a very limited high-frequency response so it squeezes your guitar sounds into a keyboardy, music boxy kind of texture. While that’s playing in the background, you can be playing very clearly over the front of it and your guitar is quite distinct from the recorded loop.

How close was the finished product to what you had envisioned?

To work on the prototype, Vex said he bought a kit from Radioshack, put all the components on a board and started playing around with it.

“I discovered I could force it to loop – only one length of a loop, but it would play again and again again. And I was able to hear exactly how my effect would sound. In that particular case I knew what it would sound like the very first day I started working on it because I made something that could demonstrate the sound.”

“In this particular case, I was discovering things along the way that first day and all the things I discovered that first day were included into the final design over a three-year period.”

Was there much trial and error involved?

While tinkering with the kit, Vex said, the batteries started dying, giving the playback a sludgy texture.

“I was like ‘Woah! It slows down – how often do you find something that sounds like an old tape recorder? Now I know what to do, so I vary the voltage on the chip while I’m playing back to have vibrato. That’s what made the magic happen with that. The compression smashes the sound to make it sound like an organ or keyboard.”

“All the different things it does are the result of the limitations of the chip – but you know, you work with what you’ve got.”

On the Value of Theft

After completing the design, Vex said he still wasn’t sure of what he had or why anyone would want it.

“I showed it to my buddy Jimmy and he said ‘Can I borrow it? I said ‘OK.’ He didn’t give it back to me for a few years. He stole it, essentially. He immediately saw the value in something that would just smash your guitar sound down.

“I realized it had value – every time I have something stolen from me like that, I know they really like it.”

[…] also got a fantastic interview and photos with the legendary Zachary Vex of Z. Vex, creator of the Fuzz Factory and Box of Rock, and one of the people who really created […]